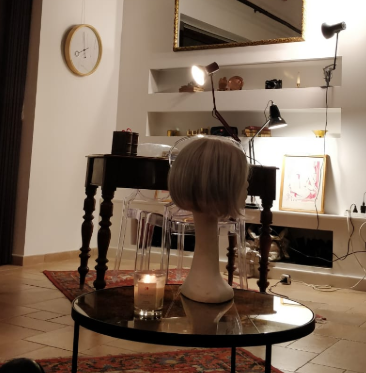 When I first read that Alfred Buttigieg’s L-Interrogazzjoni would be held in a private villa, instead of the usual theatre space, I had two reactions. I was intrigued, of course, because everyone enjoys an element of ‘the different’, especially in Malta’s theatre scene.

However, I admit that I also viewed it more as a gimmick to pique audience interest than a device that was integral to L-Interrogazzjoni itself. Turns out I was wrong and, as it was immediately apparent from the very first few seconds of the introductory scene, the choice of venue is indeed integral to the delivery of the play itself.

I walked in to L-Interrogazzjoni with a certain sense of expectation because of all the strong names tied to this play. L-Interrogazzjoni is scripted by Alfred Buttigieg, whose works I respect immensely; it is directed by Lee-N Abela – and we’ve all seen what she’s capable of with Min Hi?, that other intense one-hander. The play is also part of the Teatru Malta 2020 programme and, given artistic director Sean Buhagiar’s approach that national theatre should take risks, the excitement was real.

L-Interrogazzjoni revolves about a specific moment in time in the romantic relationship between two women, Stephanie and Martina, played by Angele Galea (who recently scripted a play highlighting the lives of prostitutes in Malta), and Clare Agius respectively. I was also happy to see the return of Agius to the stage after quite a long absence.

Without any further waffle: as part of the audience I am ushered into what is obviously someone’s living room. It is immediately clear that the venue for L-Interrogazzjoni was not just a matter of renting out an impersonal villa for the performance. This is a lived in space, with someone’s actual personal belongings spilling onto the set, which includes a painting from the Saudade collection by Buttigieg’s son Gabriel to very good effect, unless I’m much mistaken. I sit down at the very front, on the sofa, surrounded not by props but by someone’s books and nik-naks.

Judging by the promotional material released before L-Interrogazzjoni‘s first night, Abela’s aim was to create a voyeuristic feeling within the audience. She succeeds in this even before the play actually started.

Off set, hovering in the shadows of a different room altogether, a woman dabbles on an easel. Piano music plays in the background. Eventually, with no fanfare and no introduction, she walks into the living room where we are seated. Revealing herself to be Galea, she starts fussing around with some clothes.

Eventually, she is boisterously joined by Agius, who nails the ‘it’s been a stressful day and I’m totally done with my partner’s bullshit’ vibe. Thus, the scene is set for what turns out to be an intense and continuously mood-shifting play within a play.

Without giving away too much, L-Interrogazzjoni sees both actresses continuously switch between their role-playing of a sinister event that Martina was involved in and their current reality. Agius and Galea manage to cram a lifetime’s worth of emotions into this one hour.

Agius is alternately seductive, menacing, vulnerable and bratty. Galea is clingy, frightened, shallow and with a sexuality more naive than her counterpart’s, but just as effective.

Both actors switch from the role-play to the ‘real’ (for want of a better word) dialogue seamlessly, leaving the audience reeling and wondering whether what they are seeing is genuine or whether it is also part of the roleplay in L-Interrogazzjoni. This uncertainty leaves us with an ever-present sense of menace. An occasional, well-placed joke cleverly separates the role-play from the characters’ reality, serving as anchor to the audience experience.

L-Interrogazzjoni reaches a conclusion that leaves us guessing to the very end. We are not sure whether the scene is being set for tragedy, or for a reconciliation. When the ending comes, it’s almost a relief as we’ve been holding our breaths for so long.

To put it in a context that those who have already seen the play will understand, Netflix has nothing on Buttigieg’s script. Watch it, and you will know what I mean.

L-Interrogazzjoni runs until February 16 and tickets are available from here.

Want to read more theatre reviews? Check out my take on The Importance of Being Earnest, which is still running at Teatru Manoel. Keen on seeing a one-hander? Read an interview with the actress in Jessie Cave’s Sunrise, being produced by FM Theatre as of next weekend. Or for an alternative kind of theatre, how about a dash of Undine Le Verve’s Burlesque?