You are here: Home / THEATRE / Theatre Review: Whats Their Names Comedy of Errors 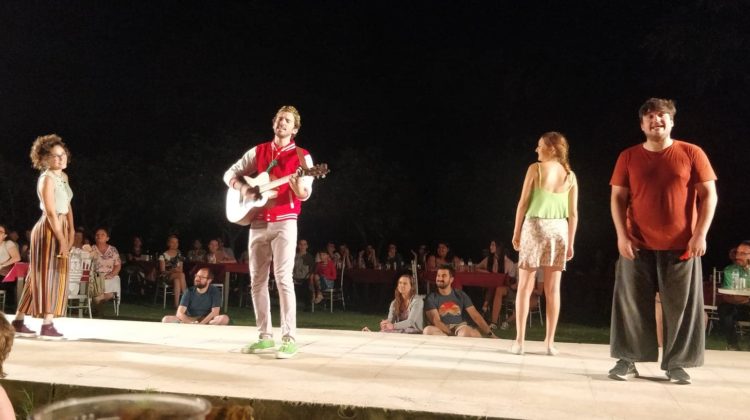 The fresh take on Shakespeare that we’ve come to expect from this production company.

Whats Their Names Comedy of Errors – the first theatre production after months of, well, misery indoors. Guys, don’t expect this to be a technical review. I was way too busy enjoying it all and being thankful that this was happening, to check out the finer nuances of thespian talent.

Which is not to say that it wasn’t present, of course. But topmost of my mind is just how enjoyable yesterday’s Shakespeare offering was, which is a review in itself. A very non-academic one, but isn’t fun at the theatre just what the doctor ordered to help chase away those self-isolation blues AND to help support our local theatre scene?

So, some details in case you haven’t yet made up your mind whether to spend your Saturday or Sunday evening watching Whats Their Names Comedy of Errors.

The location – Villa Bologna Gardens, taking more than a leaf of inspiration from the other traditional summer Shakespeare offering, the MADC’s San Anton production, which we are sadly all missing this year. Shout-out to all those who had already worked so hard on this year’s play, but had their plans scuppered by the pandemic. We can’t await your return and we are thinking of you!

However, all similarities between the MADC approach to Shakespeare and Whats Their Names Comedy of Errors start and end with the garden. This version of the Bard takes a much less formal approach, more of a picnic on the lawn with theatre happening in front of you.

Social distancing rules were fully-followed, and people sat on their own separate tables and even on the lawn, which made for a very convivial atmosphere. Especially as we could also enjoy wine and nibbles properly, turning this into an evening out with all the trimmings. Like I said, just the gentle re-introduction to live theatre that the doctor ordered.

Onto the production itself. Anyone who’s ever watched Whats Their Names doing ‘the Shakespeare’ know that it’s a much different kettle of quips than the typical treatment the Bard often gets. This one was no different, with the choice of script – a supremely silly comedy featuring the usual cases of mistaken identity Shakespeare does insanely well – aiding and abetting the cast’s penchant for japes, which director Chris Gatt appears to have had a field day with.

The cast was made up of the usual suspects – Tina Rizzo, Joseph Zammit, Gianni Selvaggi, Rebecca Camilleri, Sandie von Brockdorff and a cameo by Phillip Leone Ganado as Egeon at the end. Some highlights from their performances:

Rebecca Camilleri – channelling all the jealous wife vibes brilliantly as Adriana, her voice going up just the right amount of octaves when needed. I had loved watching her in Jesse Cave’s Sunrise some months ago, and I loved her yesterday. Once again, she represented all the women who are SO done with some men’s crap the world over – you go, girl.

Tina Rizzo – taking on the role of Luciana, Adriana’s sister, a less extensive role than we usually get to see her in, but oh the way she emotes. Rizzo could probably just say nothing and still manage to convey all the lines just through her facial expression, and the dynamics between her and Camilleri were just beautiful, the one bouncing off the other’s cues without missing a beat.

Gianni Selvaggi and his hilariously camp character changes (how many pink shirts and trousers does he own, exactly?). Can’t leave out Pinch, the exorcist that brought the house down with the Boomshakalaka dance that morphed into a simply hysterical macarena.

Sandy von Brockdorff‘s hilarious mastery of accents and fast costume changes. From the hamalla courtesan to French sophistication, a stern abbess and even Madliena babe, with all the requisite ‘eyyyy’s. Bang on the money, every single time.

James Ryder‘s equally fast character changes – at first somewhat confusing, because unlike the others he wasn’t changing costume at all, which made distinguishing between the two Dromios somewhat tricky. But the physicality with which he imbued his characters certainly made the entire audience laugh. Clearly, Ryder is not just about the TikTok videos.

Finally, Joseph Zammit as the two Antipholus (Antipholuses? Antipholi? as the Duke rightly comments at one point), not much to say except that he rocks both parts – as usual. Zammit is easily one of my top three favourites on the current crop of Maltese actors, and his versatility is impressive. In this production, he puts it to great use by creating two very different characters and managing to suspend the audience’s disbelief with very little effort.

Also, thumbs up to the members of the audience who gamely did their part, some more than others. Officer, I’m looking at you, chasing Antipholus while holding on to your trousers for dear life. We salute you.

What’s Their Names Comedy of Errors contained all the necessary ingredients for a chill summer’s night of theatre – easy laughs, a fresh take on Shakespeare, some music, a cast that was clearly having a blast, all washed down by your drink of choice in a stunning garden. Missing out would be an error.

Whats Their Names Comedy of Errors runs today and tomorrow (July 18 and 19). Grab your tickets here.

For other theatre related posts, check out this review of Teatru Malta’s Min Hi? and this production of The Importance of Being Earnest.