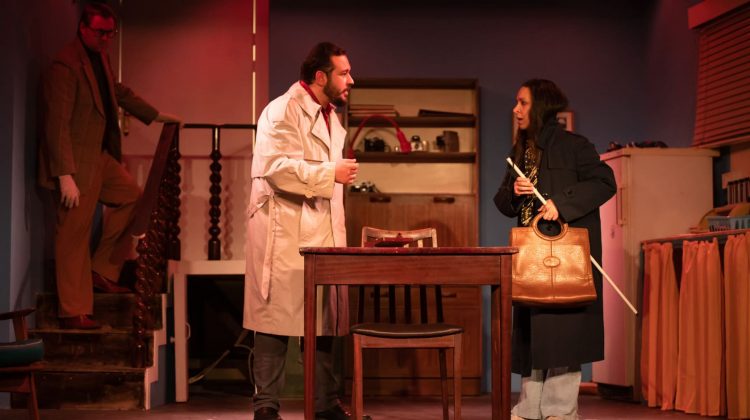 They really don’t make them like Frederick Knott ‘s Wait Until Dark anymore. I have to confess quite the fondness for this style of thriller, which was penned back in 1966 and which is currently being staged by MADC at the Clubrooms in St Venera.

Do not be put off by the fact that the play is almost six decades old. The script (which was also turned into a film) is that rare gem that barely ages and is equal parts edgy, funny and thrilling, despite the fact that the plot devices are quite obvious. I didn’t find the story dated, at all, and it’s certainly a valid addition to the MADC programming.

Upon arrival at the Clubrooms, director Tyrone Grima places the audience right into the spirit of things by keeping the auditorium in the dark until the play starts. And when it starts, the audience is hardly given a moment to breathe with a very well-placed and well-executed staging that keeps everyone entertained throughout the length of the play (which is not inconsiderable, coming in at just under two hours, by the way).

I’ll cut to the chase: Grima and his cast have done an excellent job with a script that, under less capable hands could easily turn into a comedy of errors. This is mostly because a lot of the action centres around Susie (Erica Muscat), the blind protagonist of the story, and a substantial part of the play takes place (as the name of the play might suggest) in the dark.

The potential pitfalls are many, especially because the narrative requires precisely choreographed movements when multiple actors are simultaneously on stage – which happens quite often. And yet, not once did any of them falter or take a mistep.

I won’t give away too much of the plot as I don’t wish to ruin it for those of you who have yet to see it. Suffice it to say that a doll full of heroin has, through a series of improbable events, ended up at the house of a blind woman. Two conmen are tasked with its recovery, under the orders of a rather more hardened criminal.

It’s a tight cast that Grima has gathered together here. Muscat shines as the blind Susie, somehow coming across as both vulnerable and feisty at the same time. Throughout the time she is on stage, her credibility as a blind person never dips.

Myron Ellul gives an equally strong performance as Michael, the conman who pretends to be a friend of Susie’s husband in order to get his hands on the doll. The relationship between Susie and Martin is a complex one, and both actors effortlessly communicate the underlying chemistry to the audience.

Joe Depasquale is both hilarious and menacing as Conman No 2 Sam Hendrix, while Edward Thorpe portrays the character of a dangerous criminal – shouting, scuffles and all – without falling into the trap of hamming it up. On the night I watched the play, the role of Gloria as the neighbouring child who helps our Sue was played by Shaznay Mangion. Mangion shows great potential and I can’t wait to see more of her on stage.

Grima makes good use of the space he has available. The decision to spread the action across the main stage and two secondary areas works and helps keep fast pacing. One point about the lighting – the two spotlights facing the audience can cause some discomfort to those in certain seats at the front.  Luckily, they don’t stay on for too long, but audience testing might have helped avoid this.

Two hours of this play passed by in a flash, and I walked out with a big smile on my face. This is good, old-fashioned fun at its best, get a seat before its run ends.