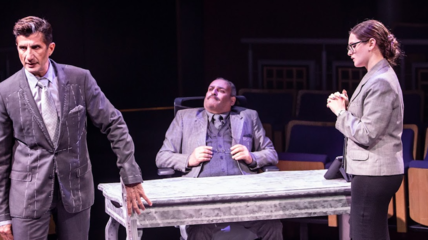 Ġiraffa Ħarbet minn Kastilja got me intrigued from the very first artwork on Facebook. But, because of the respect I hold for Aleks Farrugia’s work, I was actually hesitant to go and watch this play he scripted that has just hit the Maltese theatre scene. I am a big admirer of Farrugia’s writing, and this is a good time to remind everyone what a damned shame it was his novel Għall-Glorja tal-Patrija was disqualified from the European Union Prize for Literature Prize simply by virtue of it being published by the SKS.

So why was I hesitant to watch Ġiraffa Ħarbet minn Kastilja? To put it bluntly, true satire is not something I find frequently on the local stage, particularly the home-grown kind. Too often I’m promised satire but, instead I am served slapstick. And I didn’t want to be disappointed by Farrugia’s work.

I’ll cut to the chase: my concern was unfounded. With Ġiraffa Ħarbet minn Kastilja, Farrugia gives us a 90-minute script that fires continuous shots at every political authority in Malta, the audience literally laughing out loud non-stop. The fact that he manages to achieve this using the most absurd narrative adds to the brilliance of the play.

Put simply, the nameless Prime Minister (Peter Galea) sends Malta’s Foreign Minister (Anthony Ellul) to France to recover the sword of La Valette. The minister returns with a giraffe instead, which escapes from Castille’s courtyard and proceeds to wreak havoc in the streets of Valletta. The Commissioner of Police (Karl Schembri) is roped in to control the situation – cue the ‘he’s eating rabbit’ gags, and the Prime Minister’s long-suffering PA (Marjann Attard) has the unenviable task of keeping everyone in check.

What follows is a cutting spoof of the inner workings of government, with political gerrymandering that reaches absurd levels. Along the way, everyone is a target for Farrugia’s caustic pen. From the Police Commissioner to the Prime Minister, the leader of the opposition and the press (represented by Charlotte Formosa, Miguel Formosa and Jacob Piccinino).

The script has some pretty cutting one-liners. When the Prime Minister says that it’s impossible that security didn’t spot such a suspicious animal escaping from Castille, the minister’s reply is comedy gold. “Daqs kemm igħaddu annimali suspettużi minn bieb Kastilja.” That one brought the roof down.

Director Daniel Azzopardi did a fantastic job translating script to stage, as did the cast. The decision to cast everything in monochrome, except for the tell-tale dashes of red and blue, made quite the impact. The stark set design by Romualdo Moretti complemented Nicole Cuschieri’s costumes and Chris Gatt’s lighting seamlessly. Even the move to depict the giraffe digitally – with excellent comic use of the French accent voiced by Antonella Axisa – was clever, although this part could have easily been cut down by half as it was essentially the one joke stretched for too long a time. I did enjoy the subtext referencing Ionescu’s brilliant work, Rhinoceros, especially as it gave context to the absurdity of the script.

Galea’s Prime Minister was disturbingly on point with the misogyny and manipulation. The part where he walks around the theatre space shaking everyone’s hand, like he’s on the campaign trail, was really funny. The audience also brought their A-game, spontaneously giving out banter in reply to Galea’s semi-rhetoric questions.

Ellul’s Minister was the greasy and subservient fool one would expect, and Schembri’s Police Commissioner the essence of the stereotypical bobby with very little happening between the ears. I also loved Attard’s depiction of Maria the assistant – or Spice, as the Prime Minister creepily insists on calling her. She does a super credible job as the woman who clearly has triple the brains of everyone else in the room but needs to play the game. It’s a role that will cause many of the women in the audience to sigh.

The script is peppered with phrases that will be very familiar to anyone who follows local politics. L-istituzzjonijiet qed jaħdmu. Serenita. L-Aqwa fl’Ewropa. Pożittivita… It doesn’t take a genius to figure out that maybe the giraffe is standing in for a much darker topic.

I particularly enjoyed Farrugia’s treatment of the journalists. Anyone who has ever been part of a newsroom will recognise every single phrase, situation and dilemma. Like the Giraffe scene, the press conference could’ve taken some shaving. We get it: the press is easy to manipulate, moving on. Having said that, it considerably added to my enjoyment watching The Times chief editor Herman Grech and director Mario Philip Azzopardi seated pretty much across each other in the intimate theatre space. Checking out their expressions with every gag added considerably to the experience.

For more theatre reviews check out Il-Qarċilla 2022, MADC’s Wait Until Dark and Breaking the Code.