You are here: Home / THEATRE / Breaking the Code: Alan Turing 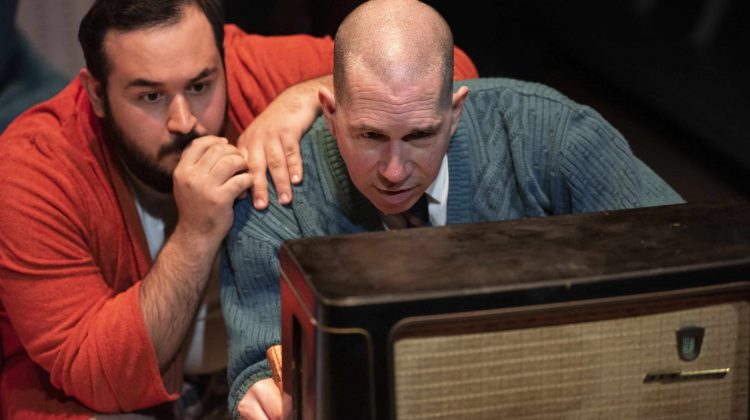 Hugh Whitemore’s Breaking the Code is based on the poignant life story of Alan Turing, the man who broke the code for the German Enigma, allowing the Allies to foresee upcoming strikes and playing a pivotal role in helping them win World War II. Turing’s backstory is pretty heartbreaking – his invaluable contribution did not receive widespread recognition until after his death, and his actual life was blighted by the fact that homosexuality was a crime, and he was made to publicly pay for it.

I had already read the book, so I was eager to add the MADC theatre production, directed by Stephen Oliver, to my Turing experience, as it were. The play is currently showing at The Blue Box, in Msida, and features American actor Devin Kordt-Thomas as the main man, together with a mix of local theatre stalwarts and some newish names.

Much of the play rests on Kordt-Thomas’s performance, who has the unenviable task of not only learning reams and reams of monologue, but also engaging the audience in what is essentially quite the complicated topic. This actor is blessed with tremendous emoting ability. Towards the beginning of the play, the scene changes abruptly from the adult Turing being questioned in a police station, to the schoolboy Turing introducing his childhood friend Christopher (Kyle Borg) to his mother (Isabel Warrington). Kordt-Thomas doesn’t miss a beat, and the transformation from adult to child happens seamlessly, with a simple shift of posture and facial expression. Not a simple achievement, especially given that there is no change of costume and only one small prop to support the transformation.

It is clear that this is Kordt-Thomas’s forte, creating pathos in his interactions with the other characters. His bittersweet relationships with Pat Green (Cassandra Spiteri), Brendon Thearle (Ron Miller) and his mother are imbued with depth, the actor managing to convey all kinds of emotion with a simple twitch of the mouth, or even a glance. By contrast, he suffers in delivering the many monologues that are included in the script, the end result lacking the emotive range displayed elsewhere and coming across as flat and monotone.

Albeit very much a secondary character, I enjoyed Kyle Borg’s portrayal of Turing’s childhood friend. Considering how little time Borg had on stage, he successfully establishes the intensity of the bond between the two schoolboys with a few words and a simple pat on the hand. I do hope that we get to see Borg in more local productions.

Another very minor character who shows up as Turing’s Greek lover towards the end of the play is Nikos, played by Myron Ellul. Ellul’s dialogue consists of 100% enthusiastic Greek, which I don’t know if he had to learn phonetically or if he actually speaks the language. Whichever the case, he brings in a touch of light-heartedness to the play, engaging the audience despite the fact it was clear most of us had no idea what his words actually mean. Another actor with huge emoting capabilities – keeping an audience hooked through sheer verve and tone of voice is no mean feat.

A word about accents. The ensemble didn’t gel on this point, with delivery ranging from Isabel Warrington’s perfectly posh Queen’s English, to Kordt-Thomas’s run-of-the-mill British accent to Franco Sciberras (as Dilwyn Knox) allowing a heavy Maltese lilt to underscore his lines… and pretty much everything in between. I also felt that a lot more could have been achieved with the staging. Instead, the action was confined mainly to one small corner of the set, with a sofa that occupies a sizeable portion of the stage barely used, which I found bewildering. Given the length of the play (on the night I watched it, it actually ran over the allotted 2 hours 10 minutes by about 15 minutes) more dynamic staging might have helped the pacing.

The play is particularly apt for the times we live in, and goes beyond celebrating a genius who was forced to live through great hardship. World War II and its tragic ramifications are constantly in the background, and it’s difficult not to draw parallels with the current international situation. Plenty of fodder for post-theatre conversations, which is also a big part of the appeal of this play.

For other theatre-related writeups check out this review of Il-Qarċilla 2022, an interview about The Roaring Voices‘ upcoming production and a review of Take Two’s Castillo.