You are here: Home / THEATRE / Masks and Misunderstandings 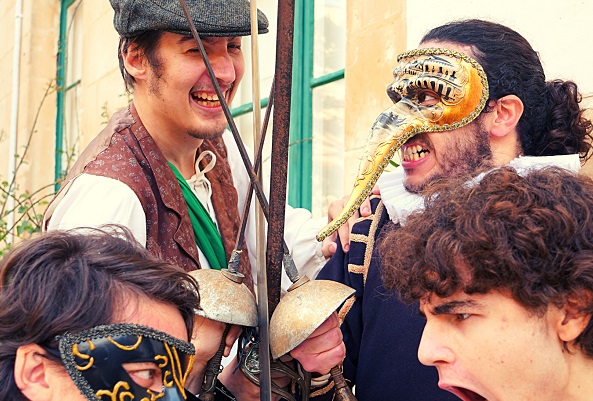 The Roaring Voices return with Aphra Behn’s The Rover. We caught up with director Polly March, to talk elopements, swordfights and the ‘female Shakespeare’

This is possibly a first that an Aphra Behn work is being performed in Malta – what attracted you to direct one of her works?

As far as I can discover, it is indeed the first production of one of her works.
She was an extraordinary woman – the first professional woman playwright and a spy for Charles the Second. She served a role model for later writers and broke cultural barriers. Virginia Woolf says of her that she earned them women the right to speak their minds.

This is a piece I was drawn to years ago, but never had the opportunity to direct. It has a huge and complex plot that requires a very large cast. Just those two things alone would have put off any sensible production company. But Roaring Voices can tackle a major piece like this, as we draw into the company many young people who want to explore classical plays.

And, as an educational stream within the Teatru Salesjan Nurture Culture programme, we are fortunate enough to receive some funding through the ADRC Trust, The BoV Joseph Calleja Foundation and The Arts Council.

The Roaring Voices are known for their Shakespearean interpretations. Aphra Behn is also known as ‘the female Shakespeare’. Would you say Maltese theatre-goers are seeing a renewed interest in British works from the 16th and 17th centuries?

We have staged two firsts in terms of Maltese theatre productions. Two Gentlemen of Verona, set in 1950s Milan, and The Two Noble Kinsmen, co-written with John Fletcher. Both played at Teatru Salesjan, and we had a hugely encouraging response.

Success, though, is not measured, for me, by how many seats we sell. Success is seeing young people, many of whom have had no exposure to Shakespeare or classical texts, many of whom have never trodden on a stage, flowering in their realisation that these plays ARE relevant, ARE accessible.

All that said, there has always been a following for Shakespeare here in Malta. The MADC carried the banner for many years, and now, over the last few years, more productions are cropping up. WhatsTheirNames Theatre‘s approach is to cut back and produce huge cast plays with six people! And this makes the productions so attractive to many.

As for other early Modern English texts, such as Restoration comedy, of which The Rover is a forerunner, I am not sure. We seem not to risk many productions like that. Again, costs are huge and that must be off-putting. It would be wonderful to see great works revived, both English and Italian…..perhaps some company will rise to that challenge?

Despite its age, the play is still extremely relatable in the modern-day. To what do you attribute this?

Actually, it is more relatable today than in its time. The plot is driven by three determined young women, each of whom has their way of life dictated by men. Father, brother, uncle.
This was pretty much unknown at the time, and Behn was vilified for tackling subjects that had previously been the province of male playwrights.

The women rebel – Hellena – is destined to become a nun. She wants to experience love, even if only once, before retreating into the convent. Florinda is the prize available to the highest bidder – a rich old man or a rich younger man, whom she does not love as she has given her heart to the Royalist English Colonel Bevile; Valeria, their cousin, is in the same situation. Each one plots and plans to thwart their destinies. And then there is Angelica, the highest-paid courtesan in Europe. An independent woman, proud of what she has achieved, educated, and literate. Another perception not appreciated back then.

What challenges does The Rover present in terms of direction, and how are you tackling them?

Helping the young cast understand early Modern English, about the length of sentences, so learning to breathe correctly. To mine the text for meaning. The different mindset of the characters to those they would recognise now – although, underneath, not much is different, really. The sheer numbers involved. Practically speaking, 23 people needing around three costume changes each!

The play is being put up at The Theatre Next Door, a relatively new space. What led to this choice?

Teatru Salesjan is undergoing renovation, and so our home venue was not available to us. Having seen several large performance spaces that just did not fit with our desire for intimacy and close connection to the audience, the choice of Theatre Next Door came naturally. It is brand spanking new, and we will be their opening production. And it seemed the right place for us, and we have been made very welcome.

This is the fourth Roaring Voices production – how have you seen the collective evolve since the Two Gentlemen of Verona? Where do you see it going?

We now have a core group of young people who have returned – always good. They interest their friends, who come and join us. We have produced two sell-out productions in our home, at Teatru Salesian. We rose to the challenge of the pandemic by creating a film, In Arden, Shakespeare Transformed.

This was a huge challenge as it was all online, was screened several times, and has been accepted as part of the Culture Pass programme. And it will be going into schools – exactly the audience at which it was aimed. This allowed us to move into the new and challenging area of Restoration Comedy. Who knows where we will go? Shakespeare is our bedrock and our joy – but that should not exclude other classic texts. If the Royal Shakespeare Company can do it, so can Roaring Voices!

Lastly, what should those who attend The Rover expect?
A joyful celebration of Carnival in Naples. The captain of a frigate that guards the next King of England, (who also had a roving eye!). Elopements. Disguises. Misunderstandings. Masks. Lots of sword fights! A really silly romp – something between the old Carry On films, and a French farce. Come in your own carnival costume and let’s recreate the Carnival we are all missing so much, at Theatre Next Door!

The Rover is a Teatru Salejan production that takes place on March 4, 5 & 6 at 7.30PM and March 6 also at 3PM, at the new Theatre Next Door, Triq il-Kapella ta’ Santa Marija, Magħtab. Teatru Salesjan is undergoing renovation, due to open in October 2022.  For other theatre pieces check out this review of Take Two’s Castillo, MADC’s Black Mountain and Il-Qfil u il-Helsien skont Manwel Dimech.