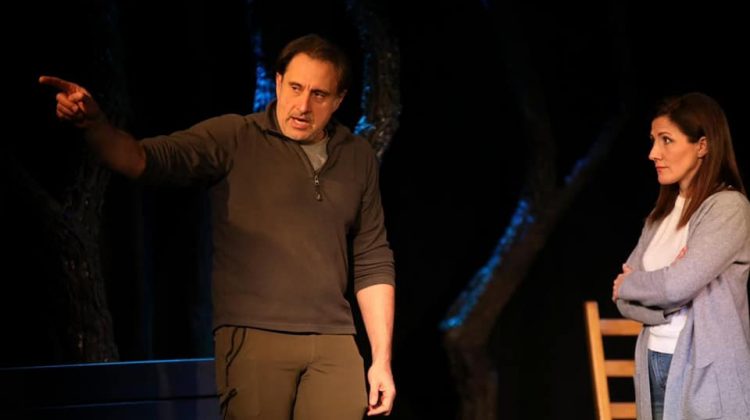 MADC’s Black Mountain kicks off harmlessly enough. A couple on a quiet retreat in the mountains, what could be more pleasant than that, right?

It only takes a few minutes, however, for the audience to pick up on the fact that something is very wrong here. Clearly, the couple, Rebecca (Antonella Axisa) and Paul (Mikhail Basmadjian), are not sharing the same bed. It’s enough for us to prick up our antennae, certainly. But more than that, it’s the stilted conversation between our protagonists, the subtext of tension that Axisa and Basmadjian nail effortlessly, that really makes us question what is happening here.

From then on, things just get weirder and weirder. The cleverness of Brad Birch’s script is such that we can’t quite put our finger on the exact nature of said weirdness. Is Paul hallucinating half the time, or are the unexplained things that keep taking place in this quiet ‘cabin in the woods’ for real?

Is there a supernatural force at work when it comes to all the little injuries he suffers throughout the one-hour ten-minute play? Or is this purely the work of some sadistic person? And if the latter, is it Rebecca to blame? Or is it Helen (Erica Muscat), the ‘other woman’ who shows up uninvited? Or maybe even someone else entirely.

It is difficult to review this Maltese production without revealing too much, because the effectiveness of the narrative depends on the twists that we encounter at every turn. Like all good ‘cabin in the woods’ stories, it is clear that something dark is at play, and that it’s unravelling what little sanity these people had to start out with.

Axisa paints a deliciously disturbing picture as the ever-suspicious, control freak of a girlfriend. She veers from loving partner to clipped, icy tones to sadistic paranoia seamlessly, sometimes in the space of the same sentence, keeping the audience guessing till the end.

Basmadjian is well-cast as the guilt-ridden party who stumbles over his words in an effort not to offend. As audience, we are ready to believe that he will stop at nothing to heal his broken relationship. Basmadjian manages to instill a mixture of contempt, pity, and finally incredulity as he builds the picture of a man who switches from grovelling to violence in a heartbeat.

As events push him in a corner that seems to tighten with every passing minute, he makes us question just how far he will go to protect what he loves.

Muscat as the other woman has a considerably smaller role, but she makes good use of the time she has on stage, a woman wronged and fast losing her sense of perspective in terms of what is acceptable and what is not.

Black Mountain is Adrian Buckle’s directorial debut, and he brings honour to the Unifaun legacy and to the finer psychological nuances of Birch‘s script, presenting a chilling drama that subtly picks at the psychology of human relationships without once falling into the trap of being too obvious. The staging was simple, but effective, with lighting and music punctuating the events and the mood of each scene.

The production is being staged at the MADC Playhouse in St Venera, and what a pleasure it is to finally be back there. All COVID-19 precautions are very well-handled.

Black Mountain runs until December 13, and is the perfect way to escape from the shitty weather outside to enjoy an hour of pure escapism and chilling drama.

For other theatre reviews check out Castillo at Spazju Kreattiv, Il-Qfil u l-Helsien skont Manwel Dimech, Girl in the Machine and The Little Prince.