You are here: Home / THEATRE / Girl in the Machine: Review 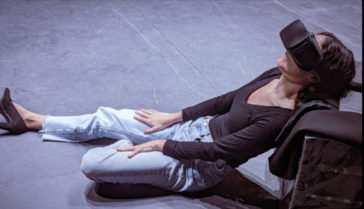 There was a time when I’d watch dystopian plays and enjoy them as a piece of far-fetched fiction. Intriguing, a good conversation starter over post-theatre drinks. But never frightening, or something to ponder too seriously, because they’re just so far-fetched, you know.

That time is now gone, as watching a dystopian tale unfold is less likely to feel like outlandish fiction and more likely to make me go “ah, maybe in 20 years’ time, maybe less”? Which makes the whole story considerably more effective of course.

Girl in the Machine, part of the Spazju Kreattiv programme this season, brought this point home pretty strongly.

Directed by Michael Richardson, this two-hander is a mere one hour long. But that one hour sure packs a punch.

This is mostly thanks to Tina Rizzo (playing Polly) and Gianni Selvaggi (Owen), who – aided by good direction –  each deliver a performance grounded in the reality of human emotions, despite the sci-fi focus.

The play is a slow, but strong, crescendo of human emotions,  until the inevitability of the ending comes as confirmation of the most human emotions of all – the overriding fear of pain, of alienation and death.

Girl in the Machine is very much an onion. The outside layer offers a tale that may be dystopian but is hardly light years away from our actual reality. Everyone is chipped – hardly an outlandish proposition, especially considering the technology already exists and if it can be done on my doggos, then I”m sure the human body is no different.

People spend a considerable amount of time wired into virtual reality ad a mood modifier. Again, something that already happens. Outside, people are rioting against the system. Have you watched the news lately? This theme of over-dependence on technology is a familiar one and, while it may not have reached the terrifying heights it reaches in the play, the AI technology is there.

But Girl in the Machine brings to mind other themes which are just as real. Alienation from a society we don’t recognise, and the loneliness this brings with it.

Work addiction and an inability to disconnect, as the continuous beeps of Polly’s phone and laptop haunt her well into the night. A reality that the WFH generation is already contending with.

Themes of suicide, as Polly struggles to accept the imperfections and suffering of life outside the world of VR.
I can really see this play being presented to young adults within a school curriculum scenario, with supporting tools and contextual discussions by professionals. I strongly urge the producers to try and make this happen.
Rizzo’s portrayal of a woman’s descent into madness is disturbing and effective. Never once does she overplay her hand. And, ultimately, poignant.

Selvaggi brings genuine emotion to the role of Owen, a man watching the disintegration of the woman he loves, helpless to prevent it as her addiction becomes stronger than the love they share.

He fights on bravely, nonetheless, the rare moments of tenderness grounding Polly and making the audience believe that maybe there is hope for humanity, after all.

Because this is the 21st-century and walking blind into a fraught narrative is no longer a thing, I will state the obvious and say that the play comes with possible triggers. Suicide, addiction and self-harm are the strongest.

And maybe it is not the best choice for those finding it difficult to cope with the current post-COVID reality.
But for those of us who enjoy a layered theatre piece with good scope for discussion, make sure you don’t miss Girl in the Machine.

If you’re interested in more local theatre pieces, check out this review of The Little Prince, a Zoom hybrid performance or this interview with a Burlesque star.