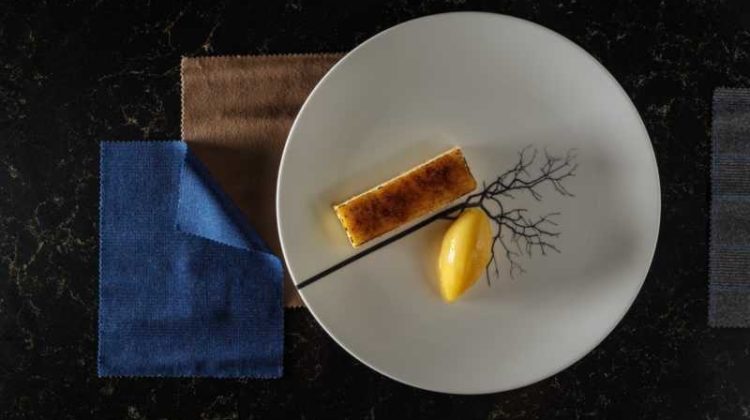 When the lovely Gordon Borg, marketing head at AX Hotels, invited me over to try out underGrain I didn’t let him ask twice. Every time I walk past the entrance to Rosselli I have felt the allure of this newest addition to the Maltese restaurant scene. The understated decor I could see from the street, coupled with the aura of quiet efficiency the place exudes, compelled me to treat myself to a reservation.

And so we showed up at Grain on a mid-week evening, ready to politely enquire whether we could be offered a table facing the street. I do so love a spot of people watching and Grain is perfectly placed for this nosy sport of mine.

But, turns out, Grain is divided into two sections – Grain at street level and underGrain, the latter hidden coyly on a lower level, offering a more intimate and refined style of dining, as the hostess who greeted us explained.

So, no people watching but we were to be rewarded by an enhanced experience that will probably rank on my top three favourite restaurants for a long while.

To put it simply, think of Grain Street as the perfect place to choose when you are in the mood for a relaxed meal, but still wish to treat yourself to good cuisine. The concept is super attractive for someone like me, who enjoys less rigid experiences.

This is the way it works: no starters, mains or desserts, just choose what you like when you like and no-one will bat an eyelid. A fun prospect that I will be trying out soon, for sure.

But back to underGrain which, even as we walked downstairs to be greeted by the friendly smile of the waiters and even friendlier flutes of Prosecco, I could see was to be something special.

underGrain is a less casual experience than the one offered by its upstairs sister, offering more of an evening out. The kind where you can tell you will enjoy an elevated level of cuisine, but without the approach being too stuffy.

In fact, so not stuffy is it that our waitress produced the menus with a flourish and a piece of chalk, explaining that all we needed to do was circle our food choices. Efficient, and paving the way for me to have some  fun and unleash my inner Picasso on a probably bemused kitchen brigade.  The twinkle in my waiter’s eyes when she picked up the menus said it all.

The underGRAIN menu is concise. Thankfully they don’t make the mistake that many fine dining places  do, offering page upon page of complicated choices. The dishes cover the traditional choices of sea, land and veg, but they in reality they are anything but traditional. Unusual ingredients are paired together very intriguingly, and I could see that Chef Victor and his team had fun being creative.

Judging by entries like wild seabass with a sweet and sour pork crust, or the risotto with the surprising coupling of smoked eel and snail, the aim here is the opposite of a staid and typical dinimg experience, with Chef keen on surprising the tastebuds with an unexpected marriage of flavours.

If these dishes delivered on their promises, underGRAIN was going to be one of those dining experiences that would be savoured and retold for a long time ahead.

And so it was. From the first amouse bouche, a cheese puff replete with flavour and crispiness, to the very last bite of White Chocolate Cheesecake, everything that made it to our table came with an explosion of taste.

We started with rabbit agnolotti, served on a parmesan, leek and black truffle fondue, the handmade pasta so delicate as not to weigh you down, the truffle adding an extra pop of flavour when merged together. And there was also a tartare of seabass, unusually served with oyster chantilly and pickled white radish,  resulting in an equally happy marriage that made my tastebuds sing.

Well, grunt in pleasure, anyway but let’s not be too specific.

For mains we covered land and sea. The Roasted Sea Bass cooked in Bonito butter was a poem, the contrasting textures of outside crispiness and fluffy bite coming with an underlying creaminess thanks to the butter effect, as well as the pleasurably sharp edge of the cuttlefish. Remember *that* scene in When Harry Met Sally? If you do, then I dont need to add more. If you don’t, shame on you not knowing your classics.

Then there was the Roasted Rib-Eye of Black Angus Beef, which we ordered medium to rare with instructions to ‘err on the rare side’. They did, resulting in this great cut of meat that was so exceptionally prepared the knife was slicing through it as though it were butter. Literally so, and I use the word advisedly.

The smoked bone marrow was pretty amazing but the surprise star of the show was the gherkin ketchup. Really? Yes, really. Something so prosaic was so expertly prepared that it really gave the dish a beautiful aftertaste . And I don’t even like gherkin, usually.

We crowned the underGRAIN experience with two rather spectacular desserts: a White Chocolate Cheesecake and a Creme Brulee. Both creamy AF, both heavy on taste and exquisitely light on the stomach.

The verdict: The chef and his brigade know exactly what they are doing, expertly playing around with ingredients to offer unusual flavours that surprise and delight. The ambience is beautiful and service charming.
I was there on invitation, so no bill was presented but think of this as a treat, a great option when celebrations are in order, a comprehensive experience rather than just ‘a dinner out’.

Want to read more about Malta’s foodie scene? Check out which local restaurants recently received the vaunted Michelin star. You can also read about a blind-folding dining experience at Bahia or learn more about AKI, the hippest Asian eaterie in Valletta.