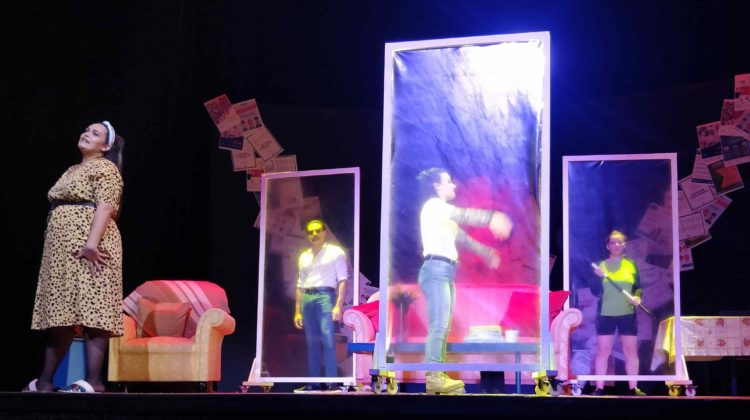 From Rona With Love, at Teatru Manoel, turned out to be the perfect theatre escapade to sort out those COVID-19 blues.

You’d have thought that we’ve had enough Coronavirus talk, and you wouldn’t be totally wrong. Until, that is, you get to From Rona with Love, a theatre production that kicks off at Teatru Manoel this evening and that I was lucky enough to preview before everyone else.

From Rona with Love is that rare animal that we didn’t know we were waiting for – a journey into our deepest Rona-related crazies, accompanied by all the feels. And unexpectedly, a journey that is also hilarious, emotional and optimistic in equal parts.

This homegrown theatre script, penned by Marta Vella, is relatable AF, with a narrative arc based on real life stories that took place throughout the lockdown that Malta experienced earlier this year.

The scene: eight people looking for love in the time of Rona in a world where everything – including relationships – no longer work the way they used to. Sounds familiar? From Rona With Love works precisely because it speaks to the experiences that many of us have been going through, and because it packages these same experiences in a witty and entertaining enough manner that makes us forget all about ourselves for an entire hour.

The stories are brought to life by a fantastic cast of strong names that each do justice to each of the roles assigned to them, imbuing each character with pathos. They are very tightly directed by Petra Sant, who succeeds in creating an entirely familiar scenario that serves as backdrop for quite a number of shenanigans.

The theatre poster promises ‘sex, love and laughs courtesy of the global pandemic’ – a promise that I was hopeful to believe in, because heavens know we need it. But I was also initially wary, because after all true comedy is one of the most difficult genres to write, direct and create.

From Rona With Love turned out to be the perfect antidote to COVID-19 ennui, to the creeping despair that life will never be the same again. There’s love, loss, redemption, self-discovery and all the other emotions in between, all of which are beautifully conveyed by Vella’s script and her charmingly irreverent story-telling.

We were already aware of Vella’s strong script-writing abilities, but with From Rona With Love she reveals a deeper depth for human pathos and imbues her dialogue with a delicious humorous realism. Listening to her characters’ woes, tribulations and triumphs almost feels like we’re engaged in a casual convo with our friends.

Vella’s strength lies in making it not only real, but also highly entertaining, with dialogue that uses the vernacular in just the right measure and easily switches from English to Maltese in that endearing way we have.

Be warned, there is some strong language in use, if you are the sort to mind that. I don’t, because you know if it’s real life in Corona time there’s no way you’re surviving it without a couple of four-letter words thrown in for fun. Anyway, I won’t give away too much, because the quips work best by surprise. Some highlights:

Emma and her newly-discovered talent for casual sex. Cue epic one liners such as : “I’m used to doing sex in English”, and “Sensible won’t get you laid” – call me dead and bring out the coffin.

There’s the adorable online relationship that kicks off on Grinder, with all the subtle flirtation developing into something, else, before rushing to its inevitable 21st century climax.

More – the daughter, back from Portugal to spend time with her elderly father in Malta “just in case”. The hilarious couple whose wedding gets postponed and who find themselves not coping with the whole WFH thing in such cramped quarters. The married couple, whose attitudes towards COVID-19 are diametrically opposed….

But I will leave you to discover all this for yourselves, because missing out on the From Rona With Love feels would be a shame. A word about being back inside our gorgeous Teatru Manoel. It was pretty amazing – I hadn’t quite realised how badly I had missed physically attending theatre productions.

Naturally, seating has been considerably reduced in order to allow for maximum safety precautions, and I was very happy to see that everything is being done to make the audience feel safe. Sadly, thanks to these precautions it means that capacity has been reduced to about 30% of its original number, so don’t dither over your bookings.

From Rona With Love offers an excellent theatrical escape for this weekend. In this blessed new normal I’ve grown tired of Netflix and chill, of solitary countryside walks and Zoom wine-ups, and I am sure many of you feel the same way.

This theatre outing totally revived my spirits and made me feel normal again, mostly thanks to a director, cast and crew that really nailed it, juxtaposing all the mad feels of COVID-19 living.

When all is said and done, the pandemic may have changed the global landscape, but it has not changed the essence of our humanity. It is very refreshing to attend a homegrown theatre production that highlights life’s foibles without sugar-coating them, while still eliciting a fuzzy feeling from the audience. Book your tickets here.

For other theatre reviews check this re-telling of a Comedy of Errors, the one-hander Sunrise by Jesse Cave or Teatru Malta’s l-Interrogazzjoni.