You are here: Home / BOOKS / The Battle for Sicily’s Soul 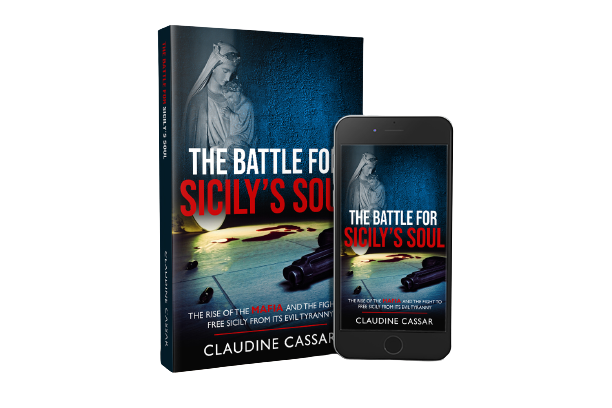 I have always been fascinated by the cultural impact that the Italian Mafia has left on this side of the Mediterranean. Maltese culture is so close to that of Sicily, a mere 130km away by air, that we didn’t only inherit their yummy kannoli and a penchant for pasta. There’s also that small matter of organised crime, systematic corruption and a general feeling that some people operate outside of the accepted legal system.

Enter Claudine Cassar’s new publication, The Battle For Sicily’s Soul. I was immediately intrigued because, unlike the films, series and books I have enjoyed (for want of a better word) so far, this would bring the Maltese perspective to the table. Here’s an author, finally, who could approach the topic with my same mindset.

The Battle For Sicily’s Soul is not an easy read. Don’t expect the romantic approach that blockbuster TV series like Suburra or Gomorrah imbued into the Mafia because you’ll be disappointed. Crucially, this is a non-fiction publication so, if you’re after a gritty account that has been meticulously researched and put together, then you will certainly appreciate Cassar’s book.

What really grabbed me about The Battle for Sicily’s Soul is the way Cassar manages to bring a strong human angle to what is, at its core, a tale of hardened criminality. She does this by weaving an emotional narrative within the foreground of history, cleverly demonstrating how the Mafia succeeded in gaining an octopus-like hold on Sicily by means of an insidious tactic – ingratiating itself with the community and becoming part of local culture, some members almost gaining the status of folk heroes.

Although a historical narrative, The Battle For Sicily’s Soul manages to avoid the trap that some other non-fictional accounts fall into – that of making things too dated. The book does go back to the roots of the organisation, but it also brings the reader into the here and now all the way up to COVID times. I found this aspect particularly intriguing, as I’d never have thought that the pandemic would actually have an impact on the business strategy of the Mafia.

On its road to the 21st century, the book takes detours into pop culture, even explaining how the classic hit movie The Godfather broke outside the realms of the fictional world its set in, inspiring and driving real-life mafiosi.

Organised crime isn’t exactly a chill theme to read about, and there is the fear by some readers that this could very well be a journey of darkness that they’re not really up for after a day dealing with the daily stresses of life.

But this isn’t the case here. While this certainly can’t be described as a light-hearted read, there is a strong beacon of hope shining all through the chapters as Cassar introduces us to the good people, the fighters, the ones who refuse to give up their beloved island to the Mafia. Ultimately, as their story runs parallel to that of the darker protagonists, it elevates The Fight for Sicily’s Soul from a mere account of the worst kinds of crime into a courageous tale the ending of which hasn’t quite been written yet.