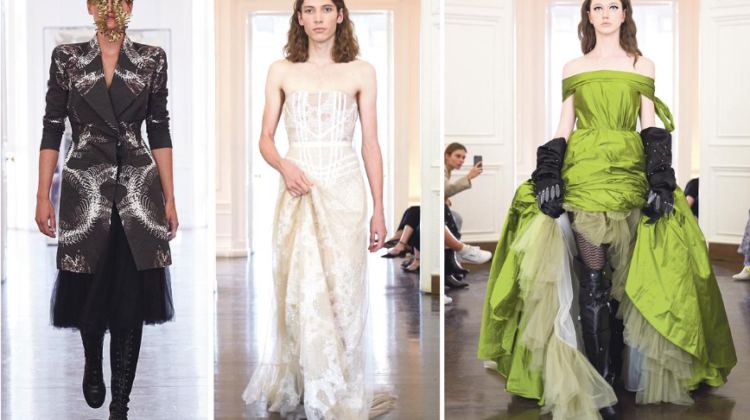 But first, he showed off Nocturnal Artefacts in Malta, at the stunning Palazzo Falson in Mdina, which truly provided an evocative backdrop for models and outfits. Here is a sneak peak of some video captures.

The entire Nocturnal Artefacts project and fashion show was supported by Arts Council Malta’s Cultural Export Fund. Oh yeah, totally digging the music. Michael Abels’s orchestral arrangement of I Got 5 On It, from the super creepy film Us.

UPDATE: My review of Nocturnal Artefacts from the Sunday Times of Malta:

I would have given anything to be present during Luke Azzopardi’s debut showing of Nocturnal Artefacts in London, which very appropriately was held at the Institute of Contemporary Arts (ICA). Sadly, my credit card was not having it. However, I was lucky enough to be invited to a very intimate preview of that same collection that was held in Mdina’s Palazzo Falson, an equally appropriate location.

Why appropriate, you may ask. Because increasingly, Azzopardi’s collections are becoming less and less of a ‘mere’ fashion statement and more of an art piece within themselves.

They are still infinitely wearable, still ethereally gorgeous, and most viewers would still love to see the whole lot hanging in their walk-in wardrobe (no basic closets for these pieces), of course. However, they also evoke that wonderfully dreamy feeling that most of us get when they are faced with exquisite creativity.

And now, this latest collection, based on what Azzopardi calls “an investigation of beauty and an exploration of the idea of ruins”, a staple theme in his studio. Once again, Douglas Crimps’s On the Museum’s Ruins, a criticism of contemporary art, is a pivotal point of inspiration. The starting point of this particular showing, Azzopardi explains, is the Nibbia Chapel (the now destroyed Chapel of Bones) which was in Valletta, and which celebrated beauty within the funerary.

“The interior treatment of the architecture within the crypt of the chapel was overwhelming, in its integration of human remains to honour the sacred. We transposed images of the chapel, with its Gothic and Romanesque architecture, over bodies and created castings, where buttressing and rib vaulting becomes exoskeleton-like, creating external supporting systems for the body,” Azzopardi says about these creations.

The collection revisits the nostalgia with which ornamentation was applied within the space and how destined to celebrate darkness this particular space was.

“While it is known that the chapel was lost through the bombings of World War II, the exact location of the crypt remains unknown and, similarly, the nature of its state of ruin.”

The pieces thus becomes a nod to the legend of that crypt, in its state of liminality within collective memory. It is similarly a cathartic exhibition that delivers artefacts of particularly personal nostalgia to the public arena. “Artisanal design and couture is here the instrument within a self-sustainable local industry, that uses concept-based fashion to embrace beauty,” Azzopardi says.  Azzopardi’s collections are becoming less and less of a ‘mere’ fashion statement and more of an art piece within themselves

Completing the circle of inspiration was a pre-Raphaelite tapestry and furniture exhibition that the designer saw in London, with the medieval scrolls in particular striking a chord. These scrolls were reinterpreted via a print based on gothic scripts and illuminated manuscripts.

Azzopardi’s perennial fabric partners were also on board for this project. The fabrics – opulent, unique, couture-level – are unmistakeably Camilleri Paris Mode.

“This season, in particular, they went out of their way to source some of the most interesting and rare fabrics I needed for this collection – lots of heavily beaded laces that almost look deconstructed, devoré fabrics, and beautiful velvets.”

It is, indeed, difficult to imagine these outfits working with any other fabrics. One of the gowns, which Azzopardi reckons is possibly his favourite, engulfs the senses with seven layers of different, transparent fabrics, all separate from each other. The result is constant movement, an effect that is intrinsically nocturnal and effortlessly dramatic.

The other pieces are likewise distinctive, with the gowns combining body, movement and layers to create an aura of freedom that is almost in conflict with the strong sense of control. The models walk sombrely down the iconic steps of Palazzo Falson in a seductive play on the senses, with the viewer constantly being torn between the staticity of the form and the flowing movement of the fabrics.

The collaboration with artist Cane Cali completes the grotesque beauty of each piece, with complex exoskeleton-like structures that seem to be fused to both outfit and model, becoming part of this narrative of grotesque beauty.

“Cane’s work is very technologically forward, there is a lot of layering and transparencies. It felt right collaborating with him on a project that is about education, and taking layers off buildings and exoskeletons till you reach the structural core,” Azzopardi confirms.

In Malta, the viewing was very cleverly paired with some of Michael Abels’s compositions from the soundtrack for the film Us. Most notably, his sampling of the intro to Why You Treat Me So Bad reworked into a slower and eerier version called Pas de Deux. The insistence of the shrill chords, alternating with the distorted synths, kept those shivers coming down my spine. Less scary, but equally dramatic was the use Anthem, also from the same soundtrack, the vocalisations adding a sense of unexplained urgency.

If theatre, food or books are more up your alley, visit my main page here.