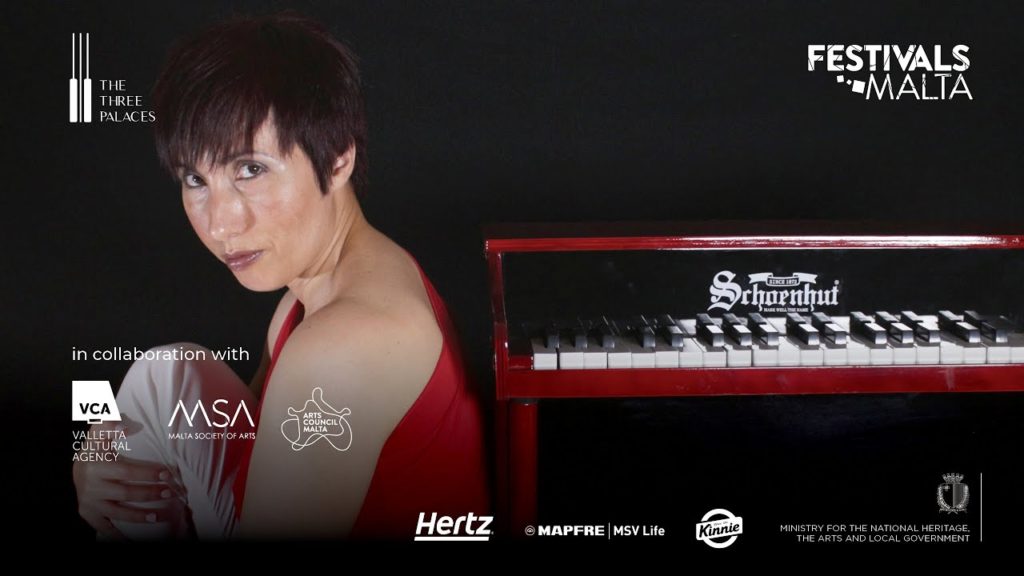 Their latest collaboration is Out of the Cage, a cycle of seven music videos that premiered yesterday as part of Festival Malta’s The Three Palaces Festival. The cycle is filmed across several locations, with most of it produced during the COVID-19 pandemic (which also sheds a light on the strong theme of isolation within the videos).

Out of the Cage engages immediately, opening with a nostalgic rendition of Watch Chimes, one of Ennio Morricone’s most iconic pieces in a tribute to the master who passed away in July earlier this year. We watch the pianist, almost voyeuristically through a glass ball, playing by the sea, with the video taking on a cinematic scope as it evokes the theme of childhood innocence, a subliminal Alice in Wonderland that makes us question what is this hidden world we have tumbled upon.

Until, suddenly, the credits roll and we are taken straight to the second video. in this Out of the Cage series. The music takes on a different nuance with Zahra’s original composition, Pounding, a piece that is almost aggressive in its intensity, building to a foreboding and dramatic crescendo that is visually complemented by the woman trapped in the ‘cage’ of our screen.

Zahra’s video production is brutally effective in its detail, showing Williams’s impeccable rendition of this percussive piece in a series of sequences that swiftly alternate between performer and pianist, with Emma Hickey perfectly emoting the scars and the anguish that appear as though they are inflicted note by note.

The sense of urgency increases with each note, a metaphorical pounding of our senses even as layer upon layer of vulnerabilities are revealed on screen, matched by the intense melodic fragments.

The third video in this cycle regales us with a definite departure from this previous mood. John Cage’s Suite for Toy Piano, with its tinkling, minimalist intro mirroring the earlier piece by Morricone, places the focus straight back onto Williams. Filmed in Mdina, the music matches the location, with a series of looping echoes that are somehow reminiscent of the winding alleys of the Silent City itself.

Once again, Zahra abruptly flips the mood with the next video, another of his original compositions titled The Worms Crawl In. The title itself is evocative of the aura of this haunting piece, where once again the toy piano is used, this time to very different effect from the Cage composition.

Filmed in an abandoned location that adds considerably to the disturbing timbre of the music itself, the piece is akin to a children’s lullaby that has been eerily twisted beyond recognition.

In his director’s notes, Zahra explains that the work was inspired by The Hearse Song, an old children’s song that he came upon in his research, the lyrics of which lend this video its title. The sounds of a children’s laughter is used judiciously throughout the composition, accentuating the sense of foreboding without falling into the trap of cliche.

The fifth video in the Out of the Cage cycle is based on Erik Satie’s Parade, another premiere for Malta in this new arrangement. Here, Zahra and Williams opt for the direct approach, shining the spotlight right on the music itself as Williams alternates between regular and toy piano, showing off her undoubted technical prowess to best advantage.

The music is unexpectedly scored to a one-act by Jean Cocteau, featuring costumes and sets by Pablo Picasso. It is an artistic decision that elevates this piece from a simple rendition into a playful, somewhat surreal multi-disciplinary effort bringing together contemporary dance, stop motion animation and puppetry, among others.

The cycle continues with what is possibly the most technically curious work of this production – Tierkreis, a 12-melody composition by Karlheinz Stockhausen, each part based on a different zodiac sign.

The piece was intended for percussionists and music boxes, resulting in a very definite and different sound. Here, Zahra has written a new arrangement for the toy piano, which affords yet another dimension to the music in this Malta premiere. Williams is filmed playing in the clock tower of the Luqa parish church, another powerful location that is very much in keeping with the spirit of this festival.

Out of the Cage comes to a bold finale with another of Zahra’s compositions, Alleluia, which juxtaposes traditional, a Capella chant with the rhythmic piano for a decidedly contemporary edge. This is perhaps my favourite work from the entire cycle, as the chants, the piano and the electronic pulses create a jarring – joyously so – effect that lingers.

With Out of the Cage, the Ruben Zahra/Tricia Dawn Williams duo has once again pushed boundaries presenting a music and film cycle that surprised me at every turn, stimulating my emotions while keeping me in thrall to the music and making me wonder what come next. The 45-minutes performance can be viewed for free via the video embed at the top of this review, and I urge anyone with an interest in contemporary music and film to not miss out.

Interested in viewing more performances from The Three Palaces Festival? Check out Luke Azzopardi’s Translations & Transformations here or check out Heiligenstadt Another World Inside, a tribute to Beethoven. If visual art is your thing, see this interview with artist Gabriel Buttigieg, or read about Artz ID, a platform that connects contemporary artists.