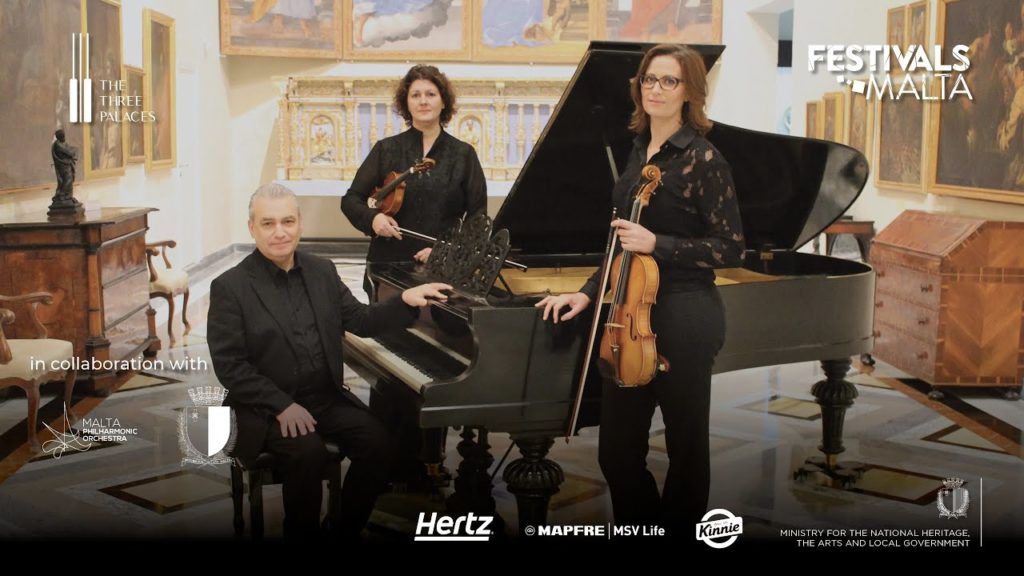 For this highlight performance on Malta arts scene, the palace referred to in the title is that of Sant’Anton, the basic core of which is the 17th century retreat built by Grand Master Antoine de Paule, in what was then luxuriant countryside.

The recital of chamber music was offered by Festivals Malta’s Three Palaces Festival in collaboration with the Malta Philharmonic Orchestra and under the patronage of the Office of the President.  Marcelline Agius (violin) and Nadia Debono (viola) are leaders of their respective sections of the MPO while Michael Laus (piano) has been connected with the orchestra and its predecessors for many years.

He is, of course, a highly-respected pianist, too, and the combination of these three very experienced musicians made for some very good and highly enjoyable performance.

The programme began with four of the Eight Pieces, op. 83 by Max Bruch. These were originally scored for viola, clarinet and piano which produces a more mellow sound than Bruch’s own arrangement replacing the clarinet with a violin, an instrument for which he had a particular soft spot.

I tend to like both versions because in both cases there is the evident hand of a master craftsman.  The four chosen pieces were numbers 1, 2, 7 and 8. All the (eight) pieces except for n. 7 are in a minor key.  The opening Andante set the pace with relaxing music in which the piano is busy at all times while the other two instruments exchange material one at a time and which has a Schumannesque tinge about it.

If the most salient characteristic of the Allegro con moto is with the piano reminding one of late Brahms, this is just a confirmation of the Romantic nature of this work.

The three performers maintained admirable balance, which continued in the more energetic and contrasting Allegro vivace ma non troppo.  There lies a tale, for a bright sunny side was revealed but it remained well under control.  The same kind of atmosphere as in the first movement returned in the concluding Moderato. The underlying passion of the music could be felt, but, restraint held sway adding to the nostalgic air with which the music faded to a finish.

The second part of the recital was the charming delivery of Three Duets for violins and piano by Shostakovich. This is a kind of musical pot-pourri from the mid-1950s which the composer put together from sources provided by other works of his.

He balanced well the three movements, the opening one of which was the Praeludium which came across with a slightly sedate air to it. It was followed by a jaunty, almost cheeky Gavotte, which was evidently fun for the performers. It was the same with the concluding airy and smoothly flowing waltz.

If you’d like to read more reviews from the Three Palaces Festival, check out opening performance Transformations and Translations , or the Beethoven-inspired Heiligenstadt Another World Inside. For visual arts pieces, read all about Gabriel Buttigieg’s darkly sensuous collections here.