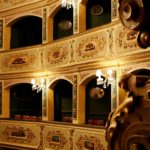 Valletta Baroque Festival kicks off on January 10 Seems like only yesterday that the idea of a first-ever Baroque Music Festival was tentatively floated in Malta. Fast forward eight years on and, the Valletta Baroque Festival is not only still around, but it's also growing bigger and stronger by the year, attracting more international participants and a bigger fanbase from … END_OF_DOCUMENT_TOKEN_TO_BE_REPLACED