You are here: Home / MUSIC / Ċikku l-Poplu takes on Cupid 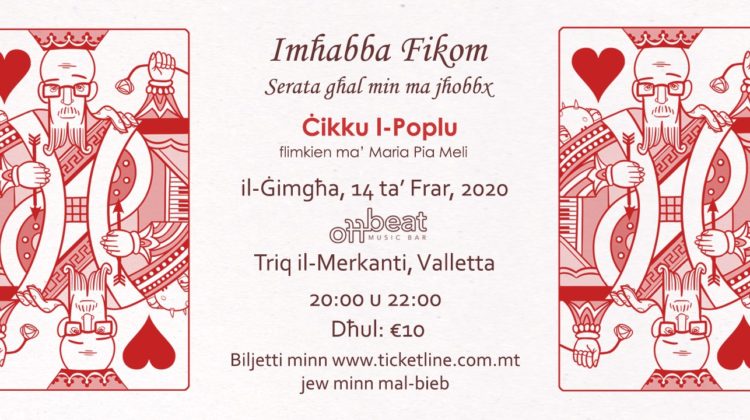 And he has a new song too!

Wondering what to do on St Valentine’s Day? Too hipster for your typical dinner a deux at some over-priced eaterie? Think you’re witty and cool? Truth is, you’ll never be as witty or cool as Ċikku l-Poplu, him of the cutting lyrics and sardonic smile.

For those of you already familiar with Ċikku l-Poplu , you know that he’s the brains behind gems like Press Like for Jesus and Selfie. His Valentine’s Day version is bound to be even more hilariously disturbing.

The title chosen for this concert sets the tone for the evening – Imħabba Fikom (Serata Għal Min Ma Jħobbx). I won’t even attempt to translate the first part of that, because if there’s one thing Ċikku l-Poplu can’t resist, that’s a good pun and the pitfalls for anyone attempting a literal translation are many.

So, what to expect? In the very words of our favourite anti-hero, an “anti-Valentine’s evening, with mostly original songs in Maltese, mostly satirical, an alternative to cheap romans and bad food”.

Well, if you put it so charmingly…

Those of you who have already attended previous concerts will be happy to know that singer Maria Pia Meli returns to share the stage with Ċikku l-Poplu for some of the numbers. Meli usually brings a more serious, poignant touch to Ċikku l-Poplu events, so we can expect a good balance between the LOLs (been waiting to drop that in casually) and the food-for-thought moments.

On the menu: social issues, politics, a hefty dose of uncomfortable reality, and… drum-roll please… a new song. Iċ-Ċiklist is a song about ‘loving’ motorists, whatever that means and as unlikely as that sounds. Cikku does promise lots of schadenfreude as the cyclist watches motorists getting all frustrated in “their little metal boxes”. We can only wait in trepidation.

Imħabba Fikom (Serata Għal Min Ma Jħobbx) takes place on February 14 (just in case you forgot when Valentine’s Day actually happens) at Offbeat in Valletta and there are two sessions, one at 8pm and another at 10pm. Tickets are available here.

But that’s not all. Ċikku l-Poplu is pulling a double-whammy on us and has scripted an original Qarċilla for us, just in time for carnival. It will be directed by Joseph Galea and involves the participation of Tikka Banda.

And we actually managed to get him to give us a fast Q&A to tell us all about one of Malta’s most beloved carnival traditions.

For those not in the know – what is il-Qarċilla?

It is a piece of street theatre which takes the form of an absurd marriage contract.

What made it popular is the highly satirical aspect – is this still true?

Yes – it is a form of social satire. There is nothing sophisticated about it and it was an opportunity for the lower classes to have a go at the rich and powerful. Of course, there is room for subtle commentary, but the immediate impact has to be one of crude populist humour.

Sometimes, we think of satire here as being a political thing: you make fun of political parties, individuals, the Church etc – but that is only one part of satire. Satire has to include the mundane and the ordinary – how we speak, how we react to the world around us.

The characters in this year’s Qarċilla are all very flawed, yet all too real. First rule of comedy: if you want people to laugh with you, you need to be able to laugh at yourself.

Sneak peak of the kind of topics to expect?

Social divide: the groom’s family is a rich business-oriented family, with too much money and very little empathy. The bride’s family tries desperately to look rich and cultured, but comes across as fake and crass.

Corruption: Not just political corruption, but everyday corruption. The characters are all easily bribed, prone to flattery, and will do anything for a freebie. Corruption is us.

Egoistic Individualism: Ultimately, they are all in it for what they can get out of it. There is no love or romance. This is all about hard cash and ego.

Was it challenging, or is it a case of the jokes writing themselves?

The source material was easy enough – contemporary Malta is fertile ground for satire. The most difficult part is keeping up the poetic scheme as it is all written in rhyming quatrains. The other great challenge was to create a balance between the traditional and the contemporary.

Apart from the central premise of an absurd marriage contract, there are tropes that need to be respected such as the scheming Notary, the mismatched lovers, the useless dowry gifts, etc.

Can you share a basic hint about the narrative?

She is penniless and suffers from haphephobia (fear of being touched). Mummy just wants her out of the house. Daddy does not turn up to the wedding – no-one really knows why or where he is.

All goes according to plan – until they get a dog as part of the dowry.
And this is where I stop.

Ċikku l-Poplu is the alter-ego of musician and composer Alex Vella Gregory.