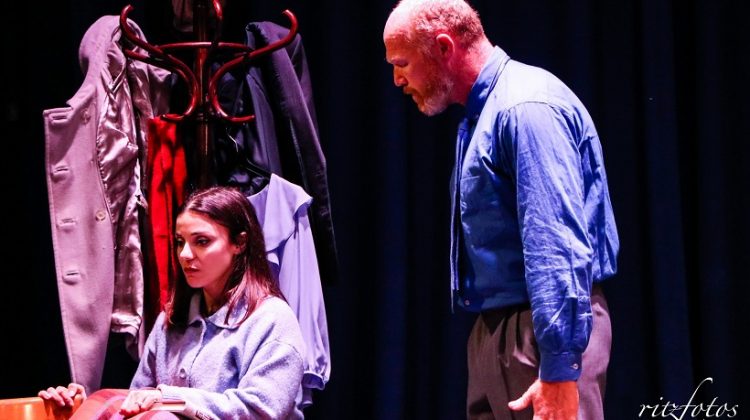 I’m not sure whether I associate Harold Pinter’s works mostly with the depressing predictability of human nature, or whether they remind me more of the touching naïveté of persistent hope. It’s probably a bit of both, which is precisely what Masquerade’s Betrayal, directed to maximum delicious tension by Ian Moore, delivers.

The theme of the play makes for a perfect return to theatre in this gloomy January. The audience walks in to the poignant sound of the violin being played by Sean Borg, setting the tone for the brooding and angst-filled hour and a half that’s to follow. My admiration for Borg as a strong and versatile artist continues to increase. I had recently seen him in the impressive It-Teatru tal-Miskin, if you’ll remember.

I very much like the directorial decision to include live music in this piece, and it’s a step that other directors would do well to consider when appropriate. The intimacy of the space at Blue Box theatre can sometimes make scene changes awkward, but in this case Borg’s ‘serenading’ distracted the audience from the prop changes that were happening right in front of them. Apart from the practicalities, it’s great to see cross-collaborations between the arts.

Onto the play itself. Betrayal focuses on the seven-year-long affair between Jerry (Edward Caruana Galizia) and his best friend’s wife Emma (Naomi Said), and the impact that the relationship has on their respective spouses and on the clandestine couple itself. The play is told in reverse chronology, handled seamlessly in this production. The technique was considered groundbreaking when the play was written in 1978 and it does stop the narrative from becoming ‘just another story about another affair’.

We first meet the couple when the relationship has been over for two years. Tensions are established early on – the couple sit awkwardly, speak awkwardly, their conversation is a touch too enthusiastic and speaks of hidden pain. Said and Caruana Galizia convey the bitterness of a thousand things that went wrong, that the audience is yet to discover. But there is also a sense of sweetness and authenticity to them that makes us want to know more.

Emma’s and Jerry’s tale unfolds slowly, each time-period peeling away the layers of resentment we witness in the first scene, until by the end we are shown the three main players – Jerry, Emma and her husband (Nicholas Jackman) in brutal honesty. The three main players are a constant brooding presence on stage, with Moore having cleverly kept the format that most other directors keep to.

Jackman is particularly excellent, his anger always seemingly simmering just right beneath the surface, exuding an air of quiet menace. There are two scenes where Pinter allows him to give vent to his fury – once when he corners Emma into confessing about the affair; the other when, soon after the confession, he has lunch with Jerry. They are both difficult scenes to carry off, but Jackman rises to the occasion, never once falling into the trap of over-indulging his emotions.

My only minor niggle in this production relates to the restaurant scene, the only time a fourth actor is present. The waiter (Craig Abela) was given a hard Maltese accent, undoubtedly for comedic effect. This didn’t work for me, especially in the context of what was very obviously an Italian restaurant. That said, the audience was in fits, so what do I know.

Masquerade’s Betrayal delivers on all counts, Moore directing a skilful cast that does justice to the nuance required by Pinter’s famed economical way with dialogue. The fact that the play is based on the the author’s very real seven year long affair with BBC-presenter Joan Bakewell is cherry on top that makes this place extra intriguing.

For other Malta culture related pieces, check out this review or Warren Galea’s Diadems, Troubadours, or this piece about an adaptation of Spring Awakening.