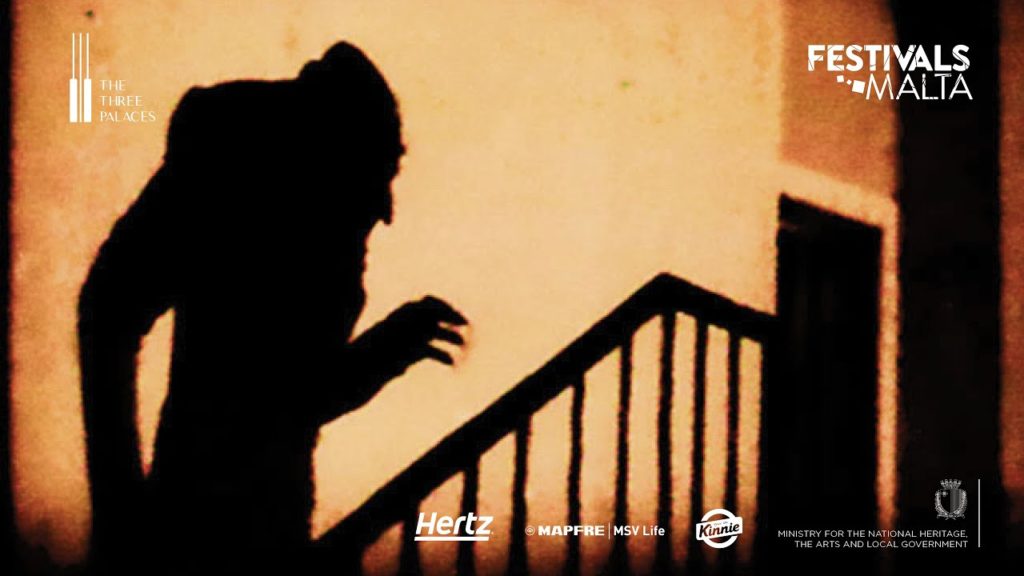 A re-imagined score and a clever re-interpretation turn this production into an engaging experience that’s akin to live theatre.

When I learnt that this year’s Three Palaces Festival programme includes a screening of that German expressionist classic, Nosferatu, in a reworking titled Forgotten Fragments Of A Symphony of Horror, I confess to having mixed reactions.

Not only have I watched this movie numerous times, which makes me somewhat jaded, but I had also enjoyed Wayne Marshall’s stunning live performance of the score during a screening at the Anglican Cathedral at another one of Malta’s well-loved arts festivals, The International Organ Festival.

My question was one: would this be more of the same? Still, old habits die hard, and moreover Three Palaces Festival director Michelle Castelletti craftily chose to programme it on Friday the 13th, which is a nice added touch. I decided to go with the flow and enjoy it, although I fully expected not to be surprised by this particular production.

Well, what can I say. I was embarrassingly wrong about that. What the production team, masterfully directed by Chris Gatt, has done here is take a totally fresh approach, not only contextualising this classic but also creating a new score by Kris Spiteri and turning the screening into a real live theatre experience via a documentary-style presentation.

But let’s start from the very beginning. The film is introduced by Pia Zammit and presented by Chris Dingli. Both well-known names on the theatre circuit, and with good reason. Somehow the two have managed to inject a darkly comedic subtle undertone that adds considerably to the experience.

Zammit’s introduction is reminiscent of the old style revue presentations – and I’ll stop there because I do not want to ruin it for those who haven’t yet seen it (incidentally, yes you can still enjoy it online).

All throughout, the film is interspersed by delightful snippets from Dingli, who alternates between snippets of information about the film and its creative process and humorous one-liners.

The latter can so easily descend into cheese, but Dingli is an old hand at this game and it is all very charming and entertaining. He is aided in no small manner by Foley artist Marco Calleja. Spoiler alert: Cutting the original footage with sequences featuring Dingli and a Nosferatu that has ‘sprung to life’ are pure gold, and I will leave it at that.

It’s not easy to come up with a re-interpretation that pleases a hardcore fan of the noir genre such as myself, but this one has certainly succeeded. As viewers, our spirits soar or retreat in fear appropriately with each scene, as Spiteri’s music effortlessly flows from serene to playful, eerie, threatening and triumphant in turns.

The inclusion of modern sound elements, far from spoiling the original mood, has only served to enhance it. It’s worth noting that, even without the film, the score is exquisite, something to also be enjoyed as a standalone.

Hats off to Spiteri (and the rest of the cast) for treating this masterpiece with the respect it deserves and for giving the audience a nuanced re-interpretation that, for an hour or so, made me forget all about COVID-19 and had me believe I was right there, in a theatre enjoying a live screening.

The performance is filmed at Luqa’s Teatru Metanoia – I have to say that I am loving the way this festival has used the new online format as an opportunity to spread its wings to even more architectural wonders around the island than usual.

Cinematography was entrusted to Matthew Muscat Drago, who rose to the occasion brilliantly, given the not uncomplicated task of marrying the mood of the original film with the interventions by Dingli and Calleja, while presenting a cohesive final performance that does justice to F. W. Murnau’s work.

Watch it while you still can. And do not be tempted to ignore the request to wear headphones. The film uses binaural technology, which basically means that two different beats are played in each ear. The brain translates these into a third tone that certainly adds an extra dimension to Spiteri’s score and to the evocative spatial sound effects expertly created by sound engineer Sergio Costa.

If you’d like to read more about the Three Palaces Festival, check out Luke Azzopardi’s Translations and Transformations, a seven-film cycle titled Out of the Cage, or Chamber Music at the Palace.