You are here: Home / MUSIC / A Majestic MPO Premiere 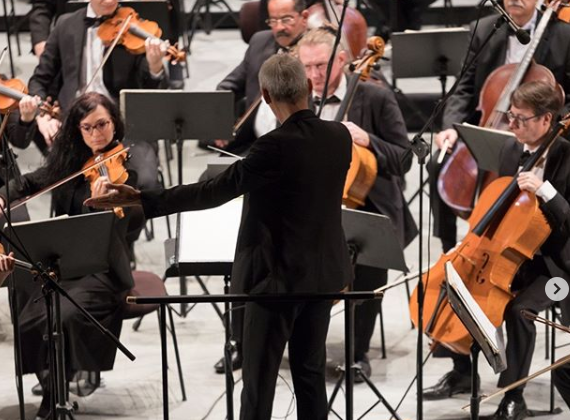 The Malta Philharmonic Orchestra recently held a gorgeous concert at the Teatru Astra, in Gozo. The concert featured two masterpieces of the early 20th century – Jean Sibelius’s Concerto for violin and orchestra in D Major, and Richard Strauss’s Sinfonia Domestica (with Anna Gockel on the violin solo).

As you can see from the above photo by Darren Agius Photography, the result was pretty spectacular. This was also the first time the latter work was being performed in Malta in its entirety. I was lucky enough to be invited to the concert and to write about it.

It all started off with somewhat lively ferry crossing to the island of Gozo – this was the long weekend, and I had forgotten that 75% of Maltese and a considerable amount of tourists would also be attempting the crossing at the same time that I was.

I realised that my car stood no chance of making it on the next three ferries. And it was already 6PM. Concert started at 7.30PM. GULP.

Happily, the lovely people at the MPO (shoutout to all of them!) had already anticipated the likelihood of transport and traffic problems and had organised a shuttle service to pick up concert-goers at Mgarr and drive off straight to Victoria. Even though I hadn’t pre-booked, a spot was miraculously found and soon we were on our way to Teatru Astra. Anticipation levels – sky-high.

Upon getting there, I quickly latched on to bassoonist Maria Spiteri Zahra. Not only super talented, but also extremely helpful, as she was the first one to accept to do a quick interview before the show kicked off. Oh, for this concert she was actually taking on the double bassoon – you can hear more about this in the video below.

The first part of the concert, featuring soloist Anna Gockel on the violin, was truly a wonderful experience and an unforgettable interpretation of Sibelius’s Concerto for violin and orchestra in D Major. The audience was rapt. Phones were forgotten. When the performance ended, the clapping went on forever. So much so, that Gockel was persuaded to carry out a moving encore.

The interval in such a high-level concert is always exciting, so once again I caught up with some musicians.

Among those enjoying the performance was pianist and composer Wayne Marshall, who noted that both pieces being performed on the evening are “notoriously difficult”. He had words of praise for conductor, orchestra and soloist, while expressing satisfaction that the Sinfonia Domestica was finally getting a Maltese airing for the first time.

Meantime, preparations for the main event – precisely, Richard Strauss’s Sinfonia Domestica – were in full swing backstage, as you can see (and hear!) from this clip.

My last interview was with trombonist Roderick Bugeja. The sound is not the best quality, but the excitement for this performance really shines through!

And now for the grand finale – take a bow, because you all deserve it!

The concert was part of the #Inħobbok series of events being organised by the Gozo ministry.

Want to read more music-related posts? Check out this feature about the upcoming Otello production in Gozo, an original qarċilla script by Ċikku l-Poplu and this latest news from Genn the band.