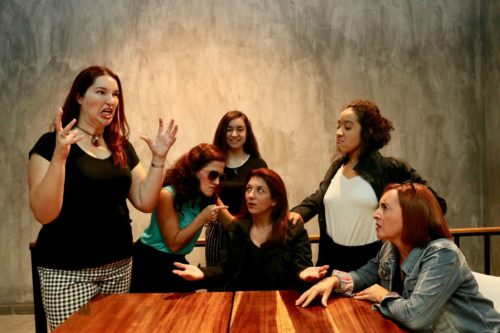 All-female cast for Accidental Death of an Anarchist

When Masquerade stages the famous political farce Accidental Death of an Anarchist this November, it will be difficult for the audience not to draw parallels between the real-life event that Nobel Prize-winning Italian playwright Dario Fo wrote about in 1970, and the real life events that are taking place right now, on both a local and global stage.

Because, while penned close to half a century ago, the themes of political corruption tackled by the piece – considered a ground-breaking piece of absurdist theatre for its time – remain evergreen.

The premise behind the play is a simple story that has been told many times before. Current events with disturbing parallels repeat themselves the world over, up to this very date.

In Accidental Death of an Anarchist, an investigation is underway into the titular suspected anarchist’s death following a fall from a fourth-floor police station window.

Only one unlikely detective can solve the mystery of Giuseppe Pinelli’s demise, and whether he jumped or was pushed. But that person is a certified lunatic with a knack for impersonation.

Malta went through its very own accidental death a little over a decade after the penning of Fo’s piece, when Nardu Debono was taken to the police depot for questioning but wound up dead under bridge. Years later, the former police commissioner was found guilty of his murder.

Watching this play on the local stage, comparisons will undoubtedly be made.

Meantime, Masquerade will be adding a unique twist to the classic piece with an all-female cast that includes renowned local actress Louiselle Vassallo.

Following a break from performance to focus on her busy media career, Vassallo will be returning to the stage in Masquerade’s contemporary take on the criminally comical play penned by

“It’s thrilling to be able to join the cast of this beloved classic, and to work alongside such incredible talent to tell a story that is as topical and relevant today as it was when it was first staged,” says Vassallo.

“This play is one of the most famous absurdist pieces about institutional corruption and shows what an individual can achieve when he – or in our case, she – takes on the establishment.”

Having been active in Malta’s theatre scene for more than 30 years, Vassallo has taken part in many productions from comedies to musicals, and pantos to dramas.

In this new production, she will be joining Pia Zammit, Antonella Axisa, Maria Caruana, Gabriella Mendes and Samantha Gauci in the stellar cast, all directed by Ian Moore.

The contemporary take on the classic farce will use its all-female cast to offer new insights into the famous tale with a political sting in its tail.

As well as the comedic mileage from having traditionally male roles played by women, the rare female perspective on bureaucracy also promises to explore what institutional corruption within a system means to women.

Masquerade’s production of Accidental Death of an Anarchist by Dario Fo will be staged at Blue Box – M Space, Oscar Zammit Street, Msida on 8, 9, 10, 15, 16, 17 November 2019, with all performances starting at 8pm.