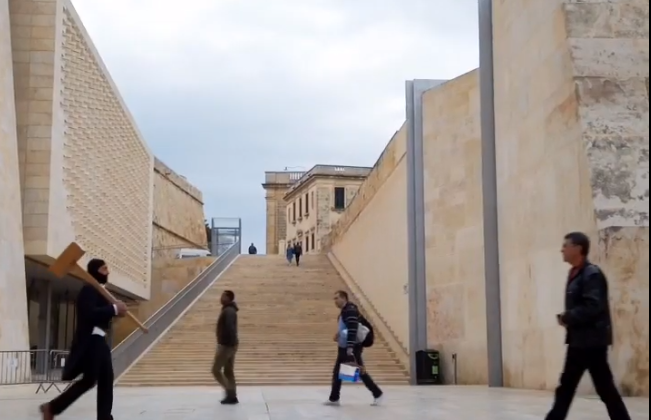 Mahler and his Sixth are set to be cool AF

The MPO Mahler event that’s taking place at the Mediterranean Conference Centre this week has already dripped more cool than a family of penguins enjoying their Sunday stroll, and it hasn’t even happened yet. Check this out – families in Valletta on Saturday morning were treated to an unusual sight, as a musician dressed in full concert-attire was spotted strolling along Republic Street carrying a giant hammer.

What does this have to do with the MPO Mahler event, you may ask. Well, the hammer is one of the highlights of Mahler’s Sixth Symphony. The symphony, incidentally, is set to be premiered in Malta on Saturday March 14 by the Malta Philharmonic Orchestra at the Mediterranean Conference Centre in a first local performance that is going to be fire.

Built purposely for the symphony, the instrument will add to the palette of sounds to be produced by Principal Percussionist, Daniel Cauchi, for the MPO Mahler event.

Mahler asked for an instrument “brief and mighty, but dull in resonance and with a non-metallic character (like the fall of an axe)”. Originally scoring three blows, the composer revised the blows to two due to his superstition beliefs. Yet, such did not spare him from events which ensued after completing the work – the death of his eldest daughter, his forced resignation from the Vienna Opera and the diagnosis of an eventually fatal heart condition.

Tickets for the MPO Mahler event are available from here or from the Mediterranean Conference Centre’s box office. A free Shuttle Service departing from the Phoenicia Hotel is available.

Enjoy music related posts? Check out this feature about the premiere of the Sinfonia Domestica in Malta, or this story about the band Genn’s latest exploits, or this exciting participation of a world-famous tenor during the Gualitana festival.