You are here: Home / THEATRE / Ma Kuraġġ u Wliedha: bold 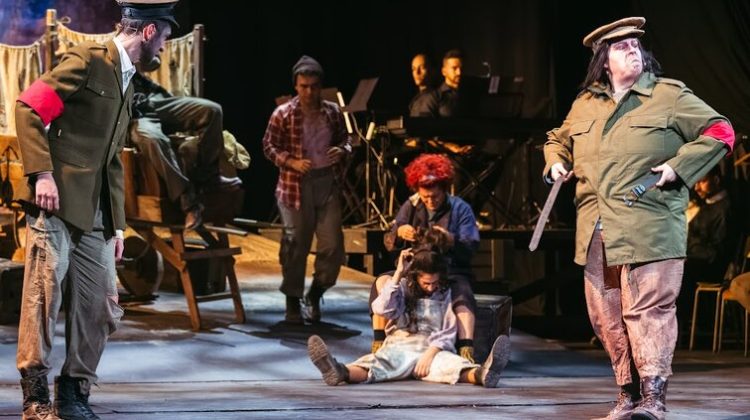 Ma Kuraġġ u Wliedha is not the kind of piece that many theatre companies are willing to put up nowadays. On paper, the Bertolt Brecht epic is far from an easy watch, a sprawling 2.5-hour account of the titular matriarch’s experience of The Thirty Years War, which ravaged Europe in the 17th century.

The narrative arc is a simple one. Ma Kuraġġ (Mother Courage) and her three offspring – Eilif, Ġobon Svizzeru and Katrin – follow the war on the family cart, hawking wares to soldiers, exploiting the shortages brought about by strife.

Theirs is a rootless and miserable existence and, one by one, the siblings succumb to the circumstances brought about by war.

By curtains down, we find Ma Kuraġġ almost (but not quite) defeated by the loss of her entire family, having to follow the regiment alone.

You’re probably wondering why I just gave away the entire plot. The story of Ma Kuraġġ u Wliedha itself is not the crux of this play – in fact, the audience is told what is about to happen in every scene, the idea being that this keeps us emotionally distanced.

The point of the play is the anti-war sentiment, a very timely one given current events. Every character bar one in Ma Kuraġġ profiteers from the war and vocally extols its virtues. But in the end, it all comes back to bite them in the ass.

On to the production itself, which reconfirms Josette Ciappara for the legend that she is in the development of Malta’s theatrical legacy. Ciappara’s interpretation of Ma Kuraġġ carries a good chunk of this production’s success. Her energy never faltering across the entire run, she brilliantly embodies the Ma Kuraġġ archetype, evoking the exact sentiments Brecht hoped for when scripting the play. She manages to communicate ruthlessness and hypocrisy while imbuing her performance with levity, easily evoking laughter despite the tragic goings-on.

Rebecca Camilleri gives an incredible performance as Katrin, the mute daughter. Despite not having one single line, she poignantly conveys the innocence that marks this character. She runs, grunts, and emotes her way into the second strongest performance in this production.

To a certain extent, her character is anti-Brechtian in the sense that we do feel for her, and she turns out to be the only hero in this story.  But her fate does highlight the misery of war, so maybe I’m wrong.

There are no weak points in this cast, and the rest of the actors are equally remarkable, especially considering that they take on multiple parts, including Matthew Dimech Genuis and Jamie Cardona, who play the part of Eilif and Ġobon Svizzeru respectively. Mark Mifsud’s Kappillan (Chaplain) is noteworthy, starting out as representative of the supposed meekness and selflessness of his religion but becoming more representative of the stereotypical hypocrisy of the clergy, eliciting quite a few guffaws.

The production includes a cast of four musicians under the direction of Aleandro Spiteri Monsigneur. The live music works beautifully and adds to the epicness of the piece. The solo songs, however, lack vocal strength.

This Teatru Malta and Teatru Manuel co-production is very faithful to the original. The temptation to adapt it for a modern audience with modern narrative expectations must have been great, but director Jean-Marc Cafa didn’t go down this road. This is a good call, given that the squalidness of war as depicted by Brecht is just as relevant today, requiring no re-imaginings or post-apocalyptic scenarios to make it relatable.

Cafa’s direction is strong and he makes the right calls throughout. He also follows the Brechtian technique for the most part, including surtitles (rather than placards) to summarise upcoming events ahead of every scene. Unfortunately, they’re placed in such a way that the lower part is often covered by the actors themselves, making it difficult for the audience in the stalls to completely follow. I did appreciate the honesty with which Cafa approached the multi-faceted script. A less confident director might have tried to impose a different take on Brecht’s original, but Cafa’s straight interpretation is informed and engaging.

The production does get too loud at times. The actors are fitted with microphones, which is necessary given the scale of the play. However, sound balancing isn’t quite on point and the music, sound effects and dialogue at times appear to be competing against each other.

Loranne Vella‘s translation of the original text is solid, with the era-appropriate dialogue flowing and rendering the sense of continuous movement that is present throughout the script. Vella’s use of Maltese colloquialisms is very natural, and contributes greatly towards ensuring that the comedic value of some of Brecht’s original characterisations is not lost.

Be warned that you’ll be at theatre for a total of three hours. The play includes two intervals, also following the original script’s intent. Is it worth it? Yes. Pacing is excellent throughout and you don’t find your attention wandering, mostly because the action is continuous and there’s no time to get bored.

I confess to being unsure of Teatru Malta’s choice to co-produce an expensive piece that doesn’t find much favour with audiences nowadays. However, there’s no denying that this is a very important piece of theatre and that it’s a valuable addition to our theatre Melitensia.

The bold decision to stage Ma Kuraġġ u Wliedha certainly pays off, giving us a surprisingly accessible and engaging production that also delivers on quality. No mean feat considering that it’s not exactly the simplest of productions to visualise.

Final remark – hats off for including a timer that fits in seamlessly with the narrative and reminds people to get their butts back on the seats after each interval. I want to see this at every production.

TLDR: Have something to eat before you go and don’t be put off by the length. Even taken simply at face value, it’s an engaging piece of theatre that lives up to the ‘epic’ descriptor.

Want to learn more about Malta theatre and lifestyle? Read about the opening of Theatre Next Door, check out a review of FM Theatre’s Ross and Rachel or of Ta’ Fuqha Senduqha at Spazju Kreattiv.