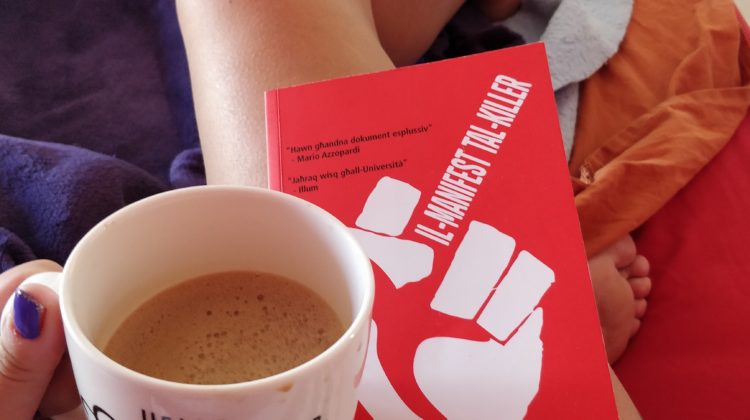 Il-Manifest tal-Killer may be set in the mid-90s, but the narrative remains eerily on point even today.

When Il-Manifest tal-Killer was first published by Saviour Balzan under the Choppy Books umbrella in 2006, Karl Schembri’s tale of a group of young anarchists who decide to take on the political status quo resonated deeply with many. It was something completely different, in terms of Maltese publishing.

Instantly, the book gained a cult following, and with good reason. The political scenario at the time saw the island buried deep under the most conservative of modern-day governments, that of Lawrence Gonzi. The comfortable status quo that characterised Maltese society was accepted by the vast majority, and the first rumblings of liberal thought remained very much underground.

And, with comedic irony – almost as if just to prove that Schembri’s fictional writings were actually very much grounded in reality – Il-Manifest tal-Killer was promptly banned by that supposed beacon of free thinking, the University of Malta radio, and declared to be ‘jaħraq wisq għall-Universita‘ by the newspaper Illum (too controversial for university students).

Now, the book has come full circle, as the author himself put it in an interview with Malta Today’s Teodor Reljic as, published in its third incarnation by Merlin Publishers, it is enjoying a new lease of life.

A fact that gives me much pleasure. But perhaps, I am biased. Having lived the ‘Ġan Frangisk Abela Sixth Form days’ in the mid-90s, which is where and when the novel is set, I am firmly within the primary demographic that Il-Manifest tal-Killer appeals to.

A 45-year-old who fondly remembers the glory days of 6th form anarchy, the heady mix of teenage innocence mixed with political activism. The pressure groups, and the protests, but also the spin-the-bottle sessions at White Arrow, and the underground ‘intellectual’ debates of the time.

For anyone who remembers blocking the main Msida thoroughfare in protest or chaining themselves as part of the Front Kontra l-Hilton, Il-Manifest tal-Killer will certainly push all the right buttons.

So basically, if what the reader is after is a trip back to the political activism of the ’90s using a frankly entertaining narrative, Il-Manifest tal-Killer undoubtedly delivers and then some. The tale includes all the requisite elements, from the planned hijacking of the Malta Eurovision contest that goes hilarious awry to police corruption, the mythical ‘garaxxijiet tal-Marsa‘ and a most unlikely scapegoat for a supposed terrorist attack on Parliament.

But the obvious question is this: how relevant is this tale to the scenario we live today? To answer this question, I only need to refer to a particular quote by one of the novel’s protagonists: “This is a crisis of legitimisation. A crisis brought about by a government in hegemony with the media and the commercial sector.”

Bombastic words, maybe, but eerily on point even in 2020. Basically, Schembri’s characters are rebelling against the insidious means that are used to muzzle free speech in the novel.

Against the way big business can stop the citizens from voicing public criticism, not by the use of brute force, but by blocking access to media. At the way financial pressure is wrought in order to subtly kill programmes considered ‘dangerous’ to the status quo – (comparisons to the Xarabank issue are inevitable). At mainstream media being controlled by corporations, and at an editorial agenda that dances to the tune of advertisers.

Show me the lie, as urban dictionary would put it. Schembri’s writings resonated in 2006, and maybe resonate even harder in 2020 when Malta is facing one of the toughest political challenges in modern history, with a political system that is morally bankrupt on all sides of the party spectrum.

Which brings me to the next point. While the book will undoubtedly be read by the usual suspects, my hope is that it gets picked up even by those who may not be obviously and immediately attracted to the themes it presents.

Those for whom the 1990s are so far into the past as to appear almost mythical. Those who may not view themselves as anarchists, or politically savvy, but who find themselves increasingly disillusioned with a system that has clearly failed us.

Heavens know that we need all the free thinking inspiration we can find, if we’re to get our island out of this mess.