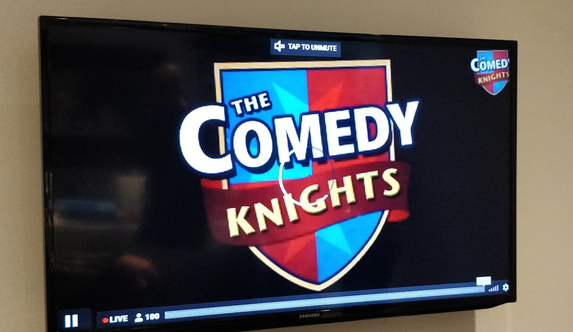 Bang on the money even from our living room

Comedy Knights *is* Christmas, for a good portion of Maltese people seeking seasonal theatre, so the news that COVID-19 was not going to have its way and that this year’s edition would be digitalised was certainly welcome.

I’ll be honest – the idea of a Comedy Knights House Party thrilled me more than the actual live version, because who doesn’t want to spend Boxing Day watching their favourite sketches conveniently from their couch, wine and munchies at hand, without the need to drive over to Sliema and queue at the bar? Didn’t think I’d ever write this, but thank you COVID-19.

So, Comedy Knights House Party it was, and with very well-priced tickets too, I have to say. The three hour laugh-fest is certainly worth the ‘admission’ ticket many times over, especially if you’re watching it with your ‘bubble’ and making a night of it, which is the whole idea of course.

First things first – a warning. Setting up your Comedy Knights House Party is a relatively simple process, and full instructions are provided for the technophobes among us. However, on the night I watched it there were technical glitches, and logging in took some time.

The show is streamed through the Comedy Knights official site, and the system may require an upgrade to keep up with similar demands in the future.

May I suggest that for the remaining run, a Comedy Knights representative is placed in charge of manning social media accounts to guide those who were having difficulties logging in and who were leaving comments on the Facebook page.

Happily, the issue was resolved and we eventually managed to log into the show, albeit having to miss a couple of sketches. We soon forgot all frustrations and, wine and pizza in hand, completely immersed ourselves in that world we love so well.

This particular Comedy Knights evening was co-hosted by Thomas Camilleri, Pia Zammit and Chris Dingli . Their natural banter, coupled with funny polls directed towards the viewers, kept the audience involved and injected that ‘live’ feel to the proceedings.

Almost all of our favourite sketches are present and correct – this year, the Sliema girls enjoy a quick staycation in the chip, after failing to wear masks in public, COVID-19 is the main star in a number of sketches, and we get glimpses of lockdown relationships going awry, 2020 business plans taking a different route than planned, and the pitfalls that accompany coffee at Giorgio’s when wearing a visor. Much laughter indeed.

But it’s ok because there is plenty of other funny stuff going on. On my list of favourites: James Ryder’s ‘adopt a Slimiż’ skit; Julia Farrugia’s ‘mekniżms’ and Gerald Fenech make a notable appearance; Ian Borg getting the Hamilton treatment is pure gold, with the eponymous track from the award-winning musical ruthlessly given the local context..

There’s a very charming singalong dedication to that most Maltese of creatures, the Politicunt. Sorry – politikant. The spelling depends on the age-group of those watching, I guess.

Oh yes, and the recent It-Torċa/Pia Zammit debacle is indeed referenced every so subtly and so swiftly. Blink your eyes as you’re reaching for that second slice of pizza and you’ll miss it. But it’s there.

A definite yay. At a time when circumstances have dictated a sensible limit on our socialising and on the entertainment avenues that are available, Comedy Knights House Party is the perfect antidote for those who are missing their dose of seasonal socials.

You’ll get to enjoy ‘an evening out’ while slobbing out on your couch. What else could we wish for? No-one will judge you for reaching for that second bottle of wine, except your cat. And you can enjoy it in company, or alone if there’s no safe bubble available (or if you’re simply not up to dealing with others). It’s a win-win.

For more theatre reviews check out this re-interpretation of a classic, Alice in Wonderless Land; or the intense Agnes of God; or Fab Fantasy Fables with Chucky for the little ones.