You are here: Home / THEATRE / Fab Fantasy Fables: Reviving the Story-Telling Tradition with a Twist 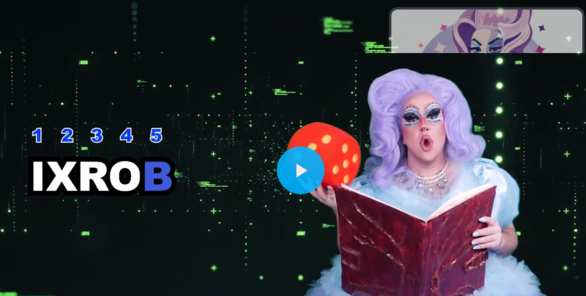 Drag Queen Story Hour is very popular in the US, but as far as I know Fab Fantasy Fables with Chucky is the first time anything similar has been attempted on Malta’s theatre scene. The online story-telling series was held as part of this year’s ŻiguŻajg Festival, and a very refreshing addition to the programming it was, too.

Based on the traditional fables which we all grew up with, but with a twist, Fab Fantasy Fables with Chucky is a bilingual performance. The Maltese versions are gorgeously translated by Leanne Ellul, who imbues them with some truly lovely turns of phrase that we don’t really hear much nowadays.

Kudos for this unexpected aspect of the performance, which I know the older viewers will certainly appreciate and which will undoubtedly intrigue the younger ones and hopefully go some way towards addressing the linguistic imbalance we experience in everyday life.

But back to oral story-telling. Sadly, this tradition has been somewhat lost. Fab Fantasy Fables with Chucky initiates a reviving, while also dragging classical fables into the 21st-century by dint of introducing new elements and endings to the most popular fables such as Cinderella and Alice in Wonderland.

The strength of Fab Fantasy Fables with Chucky lies in the fact that not only is our favourite drag queen superbly entertaining, but also in the fact that screenwriter Vikesh Godhwani is not scared of twisting and teasing popular tales into something that would very likely leave the original writers gobsmacked.

This is not done capriciously, but rather to enable Chucky to craftily open the door to discussions about some of the important issues that both adults and children will likely face on a daily basis nowadays.

However, while Fab Fantasy Fables with Chucky are educational, they are certainly not preachy, and this is an important point to make. In fact, the young listeners are unlikely to tumble on to the fact that they are being ‘educated’, so organically are themes such as diversity, gender normative expectations, cultural indoctrination and social media pressures introduced within the narrative.

Godhwani’s scripting and Chucky’s down-to-earth acting together combine into a mighty power act indeed, and I hope we will be treated to more such collaborations once Fab Fantasy Fables with Chucky is over.

Taking on the challenge of adapting classical works by the likes of Aesop and the Grimm Brothers is no easy task, especially when the end goal is that of engaging with a younger audience and making your narrative relevant to what a child is likely to encounter nowadays.

Then there is the added challenge of delivering the narrative without speaking down to the audience, or packaging it in a way that is too educational and kills off the fun aspect. Nobody wants that.

And, in fact, none of this happens as Godhwani’s script tackles some very good issues organically, while Chucky’s delivery has us all eating out of this Queen’s hands.

Thus, we learn that too much vanity can turn out to be our undoing – and that no matter how many Instagram followers we gain, no good will come out of allowing our heads to get too big! Oh yes, and that the damsel does not always have to say yes to the handsome Prince.

We find the stereotypical blonde bombshell scenario deftly dealt with by giving the evil stepsisters in Cinderella comical ears and an elephant’s trunk. We learn that if you try to please everyone, you end up pleasing no-one; and that you should follow your own dreams and live your own life without hurting others.

The play-acting is very cleverly conceived, with Chucky taking on all the roles by dint of some hilarious effects (check out what he does to an unfortunate trayful of veg) and a split screen effect that keeps the viewer reeled in.

With online performances, a lot hangs on the editing skills: it is a reality of COVID-19 performances that new skills need to be introduced to theatre, as it’s useless having an amazing production if it doesn’t translate well to online streaming. This is certainly not the case here, with Chucky (because yes, this Queen also edits) creating some fun visual effects that contribute significantly to the production values of the performance.

Each anecdote ends with a fun task, such as recreating sound-effects or even changing the endings to these fables to a new one (yay, writing skills!) with the young audience encouraged to send in their endeavours to be shared on social media.

I do love the fact that Fab Fantasy Fables by Chucky offers a platform for the young viewers to explore their creativity how and when they wish, allowing them to get out of their comfort zone without any pressures.

The Maltese language element is likewise naturally intertwined into that version of the narrative, with words like fuklar and fartas introduced and explained in a most entertaining manner.

Finally, big ups on the fact that the darker, original elements of the fables are not shied away from. This particular version of Cinderella, for example, is worthy of any little horror fanatic.

Fab Fantasy Fables with Chucky is a strong contender on this year’s ŻiguŻajg programming, and you can still purchase the episodes via the official ŻiguŻajg website. Once purchased, you have 30 days to enjoy them at home!

For other theatre reviews, check From Rona With Love, or Teatru Malta’s L-Interrogazzjoni, or Whats Their Names Theatre’s retelling of The Comedy of Errors.