You are here: Home / THEATRE / Agnes of God: Ever-Relevant 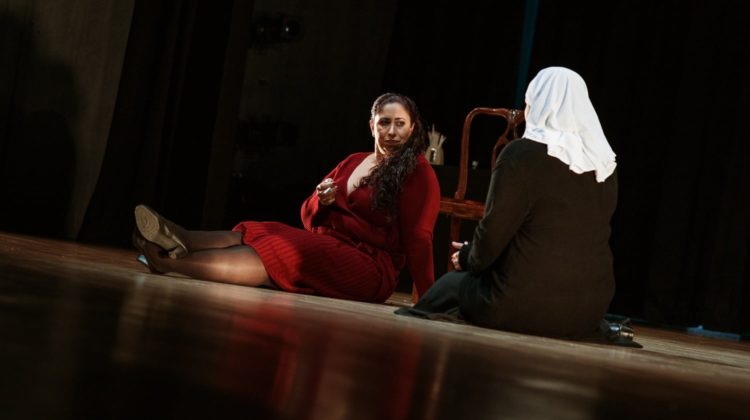 A play that taps into humanity’s intense yearning to believe in something bigger than ourselves.

That innate longing to believe in something bigger than ourselves, that most common human emotion that we all, at some point in our lives, feel – no matter how much it goes against the grain for many.

This yearning for something to believe in is precisely what Agnes of God, currently running at the Valletta Campus Theatre, taps into with an intensity that leaves the viewer reeling, stimulating questions and discussions even within the most committed of atheists,

But I’ll go back to the beginning. Directed by Tyrone Grima, the play focuses around three characters – Dr Martha Livingstone, played by Simone Ellul; Mother Miriam Ruth, played by Isabel Warrington, and Agnes, played by Kyra Lautier, who is quite the revelation.

The action takes the audience through the process as Agnes undergoes a psychiatric evaluation to determine whether or not she is responsible for the murder of her newborn. Agnes of God is an intense piece of drama that sees the three actors giving us the whole gamut of emotions, transporting us with them as their loves, fears and passions become ours.

It must have been a gruelling experience for the three actors, both mentally and physically, but never once did any of them waver, or break the spell under which they held an entire audience.

Grima cleverly takes a minimalistic directorial approach, allowing the script and acting to do all the talking rather than distracting us with extras and effects. The stage is bare, the effective use of lighting helping strengthen the already brutal atmosphere.

Lautier makes for a mesmerising Agnes, alternating conveying extreme innocence and extreme creepiness, particularly when in the grip of her visions. Warrington and Ellul play off each of their characters wonderfully. They are the ultimate nemesis, polar opposites in their beliefs and their lives. Or are they? As the play progresses, and the complicated relationship between them deepens, we start to wonder whether – perhaps – they are but different sides of the same coin.

It is very easy to understand why John Pielmeier’s script has been as successful as it has – it tackles a topic that even today remains highly relevant, while providing perfect theatre fodder for those who enjoy continuing the debate even after leaving theatre. This is not popcorn entertainment, to be consumed and promptly forgotten. Agnes of God will undoubtedly provoke countless discussions and internal musings long after the play has ended.

Rather surprisingly, the script is not without its lighter moments, with some beautifully-crafted one-liners that provoke laughter. The characters played by Ellul and Warrington respectively are wonderfully complex, and each actor rises to the occasion wonderfully, imbuing each role with depth.

In a country like Malta, where the belief system is so particularly structured and where religion and faith is obsessed over by practicing Catholics, lapsed Catholics, atheists and agnostics alike, Agnes of God will undoubtedly leave an even greater impact.

Every theatre review must necessarily include a COVID019 consideration nowadays. Agnes of God fares extremely well on the safety factors: the audience is seated apart and is only allowed in at staggered intervals after a temperature check. Seats are sanitised, and the theatre space has fresh air ventilation. Obviously, masks are a must. I was satisfied on all fronts and felt as safe as anyone can feel nowadays.

Agnes of God is produced by Christian Colombo and Tyrone Grima and runs on December 4, 5, 6 and 6 at Valletta Theatre Campus, with performances starting at 7.30PM. Seating is limited for obvious reasons. For more Maltese theatre reviews, check out From Rona With Love, this different take on Comedy of Errors, or Jesse Cave’s Sunrise.