You are here: Home / ARTS / Alice in Wonderless Land – DIY Theatre for ŻiguŻajg 2020 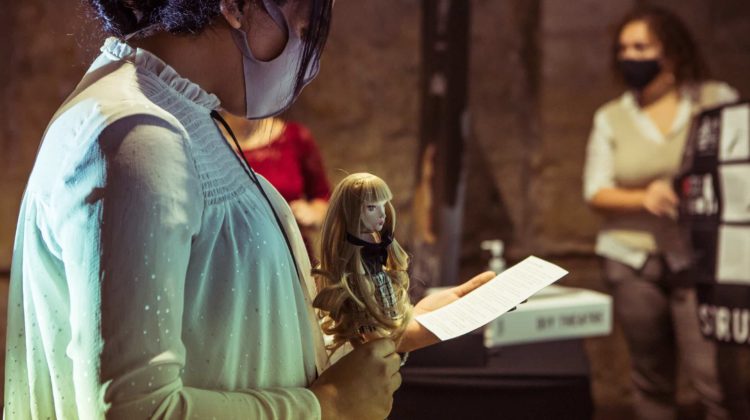 Teatru Malta creates a thought-provoking piece that all schools would do well to consider within a well-supported PSD curriculum.

Alice in Wonderless Land has just landed on the local arts scene, and it’s guaranteed to make quite the splash in terms of youth theatre. When I first read the title of Teatru Malta’s latest work, devised especially for the ŻiguŻajg 2020 programme, it didn’t take much guessing to figure out that it would deal with themes that might be unpalatable to many.

It’s probably political, I speculated, the Wonderless Land referring to Malta? Well, it’s certainly political, but not in the way that I expected. But I’ll start from the beginning, by describing my experience when I was invited to lead the piece at one of the focus groups that Teatru Malta recently organised.

Why ‘lead’, you may ask. Basically, Alice in a Wonderless Land is DIY theatre, which means that the audience doesn’t simply sit there and take it in. They actively participate in order for the piece to be performed. In the school scenario for which this production is devised, the educator will be leading the process, following a set of simple rules to help initiate the performance.

The core elements for the production involve a box containing a doll, Alice of course; the cutest USB in history; two sets of cards that are distributed to the participating audience; and a massive sheet of instructions. A projection screen, a laptop, speakers, a white wall upon which to project, and a darkened room are also needed, together with an adult that takes on the role of doll-bearer. That’s the gist of the practical instructions, which somehow I managed to fluff, but let’s not go there.

The production (which has a 14+ age classification) is a twisted re-telling of the story of Alice in Wonderland, based on text by Franca Rame and Dario Fo. I will not give away too much of what happens, because part of its effectiveness lies in the surprise element.

And yes, I was surprised indeed by the manner in which Alice in Wonderless Land unapologetically tackles all those issues that every woman – no matter her age, nationality or background – faces throughout her life. The themes are strong and will require a trigger warning. The production clearly needs to be approached by a professional and tackled within the context of a continuing classroom discourse, which is why it has only been made available through schools.

Thus, we accompany Alice throughout her life-voyage, as we see how an ingrained patriarchal structure impacts Alice’s very sense of self, creating a skewed perception of what she is and what she should be. Coupled with that other invention of patriarchy – capitalism – it exerts an influence on our anti-heroine, forcing a manufactured identity upon her, telling her what she should feel, how she should look, behave, speak, dress, eat, fuck.

Yes, you read that correctly – I don’t usually use ‘language’ on this site, and maybe some would feel that strong language is inappropriate in a theatre piece targeting teenagers. However, Alice in Wonderless Land is not about being appropriate, but about communicating the realities that every woman and girl faces, about creating a safe space where these realities may start to be addressed and, over time, changed.

In the end, Alice becomes a very product of this patriarchal structure, her life serving to create pleasure and profit for others. She is the doll in the package, teased, harassed, groomed to fulfil society’s expectations, all the while captive to the illusion that the skewed social constructs she follows are enabling her ‘freedom’.

My first instinct after viewing the piece was to question whether 14-year-olds can handle the blunt exposition of these themes. The reality is, as Teatru Malta artistic director Sean Buhagiar explained to the various of us who posed precisely that question, that most 14-year-olds are already exposed to these very themes in their everyday life.

The performance, in fact, closes off with some very sobering statistics related to the themes addressed, and seeing those numbers projected in black and white is extremely worrying.

My main concern with Alice in Wonderless Land would be that it certainly requires students to access it only via a professional educational structure, which Buhagiar repeatedly assured us it will be. Educators are given access to a very detailed resource pack that includes a thorough explanation of the themes tackled, as well as accompanying exercises to be carried out within the classroom format.

The aim behind Alice in Wonderless Land is a laudable one indeed: that of helping teenagers understand that they can help drive a change in social attitudes and behaviour. And it can certainly help start the new generation on the long road to this.

Concerns were also raised throughout the focus group about whether male students would find this too traumatic to experience, given that it puts the ‘brunt of the blame’, so to speak, on the male gender. As a woman, my initial instinct is that it is what it is. Women have been bearing the brunt of patriarchy for generations and, as we all know, there is no easy and painless way to promote change.

Bringing about this change will undoubtedly provoke a measure of discomfort to the male gender, mostly because – to put it superficially – losing the patriarchy also means losing the privileges, comforts and advantages that said patriarchy brings with it. A degree of trauma is to be expected, but this does not mean women must continue to pay the price for this male privilege.

Of course, it likewise does not mean that a younger generation of males should be left to deal with the aftermath of this without professional support. Which, once again, is why Alice in Wonderless Land is only accessible to students via an educational setup, with various activities set out for before and after the performance.

And in all honesty, the mere fact that we are asking ourselves whether male students will be too traumatised by this performance simply proves the urgency of kickstarting a process to reverse the impact of a patriarchal society. Because, make no mistake, the ones who have been paying the full price here are women.

I would even go as far as to say that it is a shame to restrict access to Alice in Wonderless Land to the student body. These are themes that many adults – male adults, especially – have not as yet fully acknowledged and faced. Last I checked, society is still being driven by patriarchy and, while it is the younger ones that hold the beacon of change, I would love to see the current generation of adults wake up to the harsh realities women must necessarily face on a daily basis. And women, unlike men, are not given a choice as to whether they face these realities or not. Women actually live them.

For more arts related reading, check out Fab Fantasy Fables with Chucky, or this interview with the creative team behind Riley’s Manic Magic.