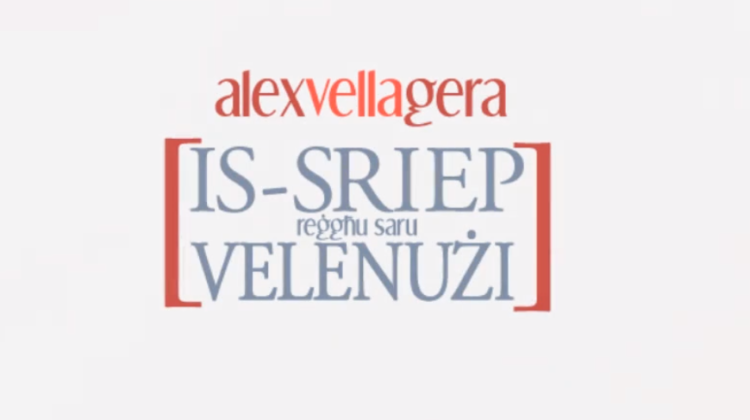 In news that will make many of Alex Vella Gera’s followers happy, Sriep has been transformed into a screenplay by Teodor Reljic and is getting the movie treatment by Shadeena.

The recently launched Facebook page tells us that the film will soon be going in production in August, COVID-19 restrictions permitting. If you haven’t yet read the book, you can get it delivered straight to your door thanks to the Merlin Publishers website.

Funding for the film was provided by the National Book Council, which awarded Bonnici and Reljic’s application with its inaugural Feature Film Fund in November 2019.

“Our ultimate aim is to create films which draw audiences towards books, and reading in general,” Camilleri added.

“Very often when we talk about Maltese history we focus on the colonisers who took over Malta throughout the millennia and barely touch upon our recent history and the challenges that Malta went through post-independence.

“Alex Vella Gera’s novel is one of only a handful of artistic works out there that dare to ask questions about the lingering impact of the 80s. Although the story is a fictional one, I felt it closely resembles the impact that our society’s unexamined history has on our present,” Bonnici said.

A long-gestating project for both Bonnici and Reljic, Sriep has just cast its lead roles, assembling a veritable who’s who of local stage and screen talents.

Chris Galea will take on the leading role of Noel Sammut Petri, who in 2012 returns to Malta from Brussels to attend his mother’s funeral only to gradually begin uncovering some disturbing family secrets.

The role of his father Richard Sammut Petri will be played by Gianni Selvaggi, while Roger Tabone – a family friend and pivotal player in the assassination attempt – will be played by the prolific and versatile Joseph Zammit.

Erica Muscat rounds off the main cast as Frances Tabone, while Tina Rizzo takes on the key supporting role of Maureen Sammut Petri. The production will be finalising casting for all roles in the coming days.

When the book was first published in 2012, its topic made it a very big deal. Publisher Chris Gruppetta remembers how “media attention to it was something pretty exciting, with an outdoor launch in Strait Street, Valletta followed by blanket coverage all over the print, TV and online media including a fully dedicated episode of the then-very popular Bondi+”.

The novel has, to date, sold 1,800 copies, “which is great for a literary fiction title in Maltese”, Gruppetta added.

Meantime, this is the review of Sriep that I had written for The Sunday Times of Malta back in 2012, when the book was first published.

On an island like Malta, one particular X-factor is likely to turn any book into an immediate object of discussion, hype and desire. That X factor, particularly mere months after his passing, is former premier Dom Mintoff.

Add an assassination conspiracy to the mix and you can see why Alex Vella Gera’s latest work, Is-Sriep Reġgħu Saru Velenużi, has been the topic of debates within local literary circles even before it was actually launched.

Of course, the fact that Vella Gera himself is as much a subject of discussion as the anti-heroes he creates also helps. It was he, after all, who threw the academic scene in turmoil by getting prosecuted for the now infamous short story Li Tkisser Sewwi.

Since the whole saga started, everyone seems to have forgotten that Vella Gera has also penned other (more valuable?) works, and his name, rightly or wrongly, will forever be associated with the story that challenged the country’s rather Baroque obscenity laws.

Until now, that is. Sriep kicks off with a fictional scenario that will horrify half the island and titillate the rest. What if a group of ‘resistance fighters’ were to plot an assassination attempt against Mintoff at the height of the 1980s? Would the scapegoat upon whom it falls to pull the trigger succeed?

How would Malta be affected? And more importantly for the purpose of Vella Gera’s story, how would this change the lives of the scapegoat’s offspring?

Sriep is in turn a thriller, a chronicle of Malta’s history from a sociological perspective, a love story and even a psychological study. It is a work of fiction, to be sure, but if you read further away from the obviously fantastical plot devices, it is also the story of every Maltese man and woman of a particular generation.

It is the story of all those who grew up in the political strife of 1980s Malta and who – whether positively or negatively, depending on which side of the fence they stood – were forever shaped by the events of the era.

The plot kicks off with a political murder conspiracy and then follows the life of Noel, one of the sons of the prime perpetrator of this conspiracy.

Throughout the book, Vella Gera jumps between decades, between narrators and between point of views very convincingly, in what has now become his trademark style.

The majority of the story follows the psychological deterioration of Noel, a true anti-hero if there ever was one. Although the signs are not immediately evident, this is a broken man, his life forever ruined by his father’s mysterious disappearance years back.

After a highly surreal, but nonetheless intriguing, introduction, the reader is immediately lulled into feeling that he is part of the setting.

It is a setting we are so familiar with; the childhood where foreign branded chocolate was a thing of wonder; the childhood where Church schools spent months closed during Mintoff’s dispute with the Church; the childhood we all eventually grew out of, opening our eyes to possibilities away from our shores; the mass exodus to Brussels and Luxembourg; the contrasting pull between a freer life away from Malta and the love that most of us still feel towards the island, despite its shortcomings.

Noel’s dilemmas are the dilemmas the present generation of 30- and 40-somethings all share. You could say Mintoff was our Achilles’ heel.

This sense of realism contributes in no small way to the way the book holds you. And, being over 500 pages long, this is no mean feat.

The book addresses the very real fears people felt with regard to the Labour Party of the day. Mintoff would turn us into Arabs, Mintoff would make it illegal to be Nationalist, Mintoff was like Hitler, a cancerous tumour on the Maltese landscape.

Despite this being fiction, some of the sentiments professed in the book will undoubtedly raise the hackles of the politically-immature, particularly given that public feelings are still very much affected by the politician’s death.

For those who find the thought of a thick novel in Maltese scary, and I know there are a lot of you, do not be put off. Vella Gera’s style is extremely colloquial.

And by colloquial I mean his characters’ conversations happen exactly the way they do in real life.

Code-switching between Maltese and English happens throughout. Purists will not be happy but, let’s face it, isn’t this precisely the way most of us hold our conversations?

I’m not entirely sure I agree with the use of English words using Maltese spelling.

I think I actually recoiled when I saw ‘brejkwater’ and ‘wikend’. Then again, as someone pointed out to me, language is a living entity that develops according to the wishes of its users.

In other words, if brejkwater has become the accepted way of spelling ‘breakwater’, who am I to protest?

However, and it is important to stress this, the book is not a political treatise. It is more a treatise on human nature, its weaknesses and strengths.

Vella Gera’s protagonist is singularly unlikeable, yet somehow the reader will empathise with his situation.

And when his world comes crashing down around him, you will feel as though in some way or another, yours has come crashing down too.

Keen on more books published in Malta? Check out the dystopian Magna Mater, Kristina Chetcuti’s take on Malta’s most amazing women, or the latest Lupu Lupettu for kids. You will also find more write-ups featuring books in the books category here.

For food, music or theatre, check out my main page here.

A funny, insightful and informative play that raises awareness about an oft-neglected issue.

A juxtaposition of innocence and nostalgia