You are here: Home / MUSIC / You Know What? New Art Jazz Metal by The Aristocrats 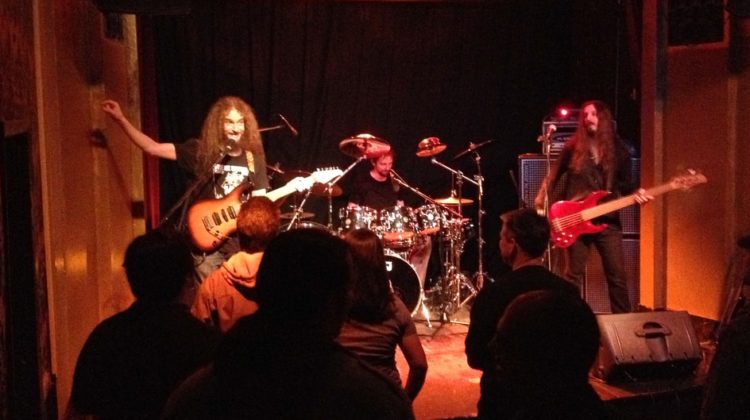 The term supergroup tends to be thrown around a lot nowadays. And sure while The Guardian has listed some pretty notable instances of artists and musicians coming together to collaborate on an album or track, not all of them warrant being called a supergroup.

However, sometimes the stars align and we’re gifted with a musical collaboration of epic proportions. This is exactly what happened when The Aristocrats formed back in 2011. The group consists of three musical powerhouses who are considered virtuosi with their respective instruments. Their latest album You Know What?, a follow up to 2015’s Tres Caballeros, is a great example of what a supergroup can achieve. If you want to know more about this bonafide supergroup and their latest album, read on for our review of The Aristocrats’ You Know What?!

The Aristocrats consist of three incredibly talented musicians: Guthrie Govan, Bryan Beller, and Marco Minnemann. Now, instead of jumping straight into our review of You Know What?, it would be better to give you a brief background on the members of the band, as it helps puts the album into context.

Guthrie Govan is one of today’s best guitarists. He’s worked with everyone from Paul Gilbert to Han Zimmer. In fact, Govan even played the guitar for Zimmer’s Hans Zimmer Live shows where he toured with a full ensemble playing his scores live for audiences all over the world.

The variety of artists that Govan has worked with throughout the years is a testament to his versatility. His versatile sound can be attributed to his technical skill as well as his extensive list of pedals that he employs regularly. The Eventide TimeFactor’s nine dual delay is a definite mainstay in the virtuoso’s pedalboard.

We see this versatility in tracks such as “The Ballad of Bonnie and Clyde”, where Govan weaves a full-on narrative without speaking a single word. However, at the end of the day, Govan is a shredder by nature. Tracks such as Terrible Lizard make full use of Govan’s Providence Heat Blaster Distortion pedal as he lets loose some truly face-melting riffs.

Bryan Beller is an American bassist and has built a respectable career as a touring musician. His professional music career spans almost three decades as he’s worked with the best and biggest bands in the world. Beller has toured with musical legends such as Joe Satriani, as well as smaller more experimental groups such as Dethklok.

His work with Dethklok is particularly interesting, as the band started as a cartoon on the American cable TV channel Cartoon Network. Like Govan, Beller’s ability to adapt to whoever he is working with was pivotal to pull this album off. This doesn’t mean that Beller can drive a track on his own. Tracks such as Spanish Eddie emphasises Beller’s ability to carry a song as the bass notes from his Mike Lull Bryan Beller BBM5 Signature Bass drive the entire piece to a satisfying climax of sound.

It is often stated that the drummer is the backbone of the band. Truer words have never been said, as Marco Minnemann acts as the glue that keeps this musical supernova from imploding. This is most evident in the song When We All Come Together, as Minnemann’s drumming bridges the song’s clashing styles. Indeed, Minnemann’s steady drumming pulls the song’s jazz and metal influences together. Without the drums, the song’s disparate sound would undoubtedly be too jarring for the listener.

All in all, You Know What? is a testament to what capable musicians can do with a little restraint. None of the individual elements of the song ever feel like they’re too much, as they all contribute to the singular effect that the song wants to convey. This is why the album merits multiple listens, as each note, beat, and riff is placed where it is for a specific purpose.

If you’re looking for more music to listen to, check out this piece about the Beethoven 250th anniversary celebrations in Malta, or this special release of Superlove’s Jarvis Put The Record On.