You are here: Home / ARTS / LE.IVA, by Austin Camilleri 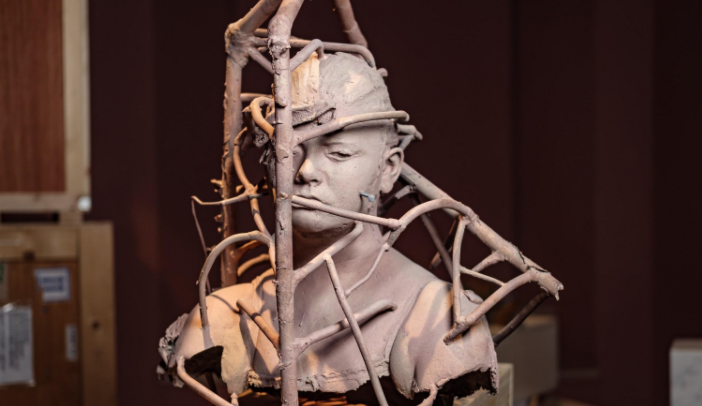 Austin Camilleri’s Le.Iva is one of those visual art exhibitions that you stay with you long after your visit, causing you to go back again and again just in case you missed something. And sure enough, with every visit, a new detail, a new interpretation emerges, giving rise to yet again more discussion and ponderings.

Because I missed the opening, I had been seeing photos and reading about Camilleri’s new solo exhibition – the first one in Malta after more than a decade – before actually seeing them live, eager to visit in person so I could reconcile these images with the exhibition tagline, ‘Anger is a lazy form of grief’. Part of the attraction of Camilleri’s art, for me at least, has always been the fact his works go beyond the immediate, visual meaning and the initial viewing. Hidden meanings, maybe even artistic metaphors, are a trademark of the artist.

Perhaps the past work that best demonstrates this fondness for unexpected interpretations and backstories would be Zieme, the iconic three-legged horse sculptor that dominated the entrance to Valletta some years back. Zieme had caused a significant chunk of Malta to rise up in indignation at the perceived slight to such a noble beast (yup, someone actually wrote this in a comment to the Times of Malta that I can’t find online). Yet, the absence of the fourth leg signified a very particular notion in Camilleri’s mind, referring to the illusory nature of power.

Austin Camilleri’s Le.Iva comes with similar hidden layers and meanings, albeit using various media and themes. the primary moving theme this time is Camilleri’s interpretation of justice and its ephemeral nature. In this collection, many of which are new creations, he explores the contrasting themes of good and bad, guilt and innocence, beauty and repulsion. And it is thus that the exhibition title of Le.Iva – in Maltese, an amalgamation of the words ‘no’ and ‘yes – starts to make sense, conveying the notion of the opposing forces that converge into each work, a return to Freud’s notion of the id, the ego and the superego and the conflict these give rise to within the self.

This conflict is reflected in each of the works that make up the Le.Iva collection. Upon entering the Spazju Kreattiv exhibition space, visitors are greeted with a massive, monumental sculpture of Neil Agius, world record holder for the world’s longest ocean swim. Worked in unpatinated bronze, its sheer size is not unreminiscent of the afore-mentioned Zieme, and that’s not the only similarity. Once again, Camilleri juxtaposes notions of weakness and power within the same work, with the swimmer’s powerful body also revealing the weaknesses caused by his ordeal in the sea.

Take your time to admire the sculpture from afar, by all means, but don’t shy away from closer inspection no matter how many strange looks you get from other visitors. While the impact of its sheer size is almost hypnotic, the detail and the divergent realities presented by this work deserve deeper analysis. The GhostTrip Series, a series of smaller individual works that are exhibited alongside the sculpture, complements these conflicting motifs, these time introducing the theme of migration and the harrowing journeys that are often faced within the Mediterranean Sea.

This is a recurring motif in the rest of the works. The section that kept me there the longest every time I visited is the Pink Room, showcasing an installation with sculptures that blur the lines between the beautiful and the grotesque. Here, it’s pertinent to mention the offsite Le.Iva sculpture that is installed in a public space in Valletta, specifically replacing the niche at the Castellenia Palace. Onsite and offsite, the identity of these sculptures circles back to a duality, each work being presented almost in a transitional phase of being and not being.

This transient duality is a common element across the whole of Le.Iva, and it is part of the reason I kept going back, always eager to reinterpret and rediscover for myself. Camilleri’s return to the local space is a majestic one that will keep you questioning the nature of the works, searching for and discovering different layers each time.

For other arts-related posts or updates about Malta’s culture scene, check out this review of Darren Tanti’s Aħmar Ħelu w’Qares, Mark Mallia’s Corvo Bianco and Iella’s Take Me Home.