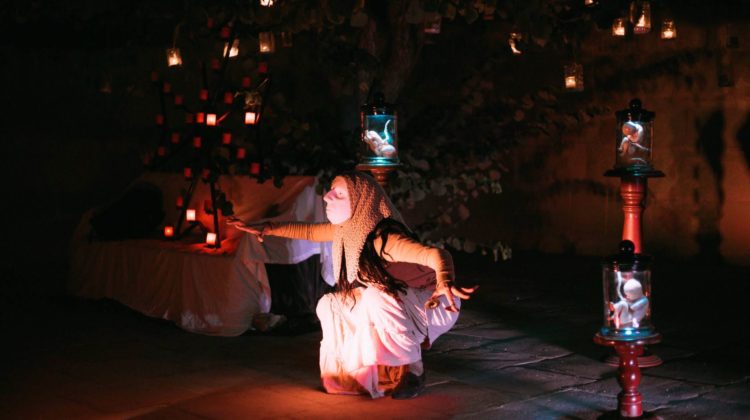 ‘Certain demographics are not exposed to art, and do not distinguish between an artistic statement and reality’

Reuben Zahra, the artistic director and composer behind Teatru Malta‘s upcoming stage production Min Hi? explains he has always been fascinated by grotesque and macabre portrayals harnessed within an artistic framework.

“A dismal action, like a beheading, is transformed into a sublime composition by a master painter like Caravaggio,” he explains.

It was this fascination that led to both the stage production and the recent spate of street performances, featuring actress Lee-N Abela, that recently were the cause of so much havoc in some Maltese neighbourhoods.

Reuben reveals how, in a few hours after the first performance in Ħaż-Żebbuġ, the news “escalated to a wave of haters on social media, police reports and withheld permits”.

He believes that the widespread reactions reveal how certain demographics are not exposed to art, and do not distinguish between an artistic statement and reality.

Here, he shares some thoughts about the upcoming stage production that takes place at the Rialto between October 31 and November 3.

“I came up with the concept for this project in 2005 while participating in a theatre festival in Besançon – France.

“My idea was to create a series of street theatre vignettes depicting a woman, whose identity is concealed behind an anonymous mask, performing a bizarre and grotesque routine. Yet, each scene had to be curated in its aesthetic attributes, movement and sound design … similar to an artistic installation.

“Trevor and I are always discussing ideas for new projects. He was intrigued by this narrative and created a short story entitled Gerita which was released in the publication Penumbra in 2010.”

“The street theatre aspect of the project is not a marketing campaign but, rather, another artistic dimension of the same project.

“I was aware that the visual impact of bashing dolls, nursing a (real) decapitated pig’s head and foetuses inside glowing jars would get a mixed reaction.

“What I did not anticipate was the scale of the reaction with our first exhibition in front of the Ħaż-Żebbuġ society of Christian doctrine (M.U.S.E.U.M).

“It’s very interesting how the event unfolded from an entertained crowd of kids to a distorted fake news phenomenon. The children who witnessed the street theatre act were amused, and they even engaged with the actress, picking up the dolls and collecting the empty snail shells that the actress was crushing in a pestle and mortar.

“We also had the full support of the tutors and educators of the M.U.S.E.U.M who supported the event completely. On the other hand, some of the parents and adults were freaked out and in a few hours the news escalated to a wave of haters on social media, police reports and withheld permits.”

“I believe everyone has the right to one’s own interpretation of the arts. And I also believe that there is no one, correct, overriding interpretation. As the creator and director of this production I have no specific message and no agenda.

“I am simply creating a visual composition which will comprise a narrative through Trevor Zahra’s script in the formal production at Rialto Cinema.

“It says a lot about our society. On one hand the reactions reveal how certain demographics are not exposed to art and do not distinguish between an artistic statement and reality.

“The same parents who lashed out to the actress bashing dolls would probably have no problem with their kids playing a violent video game, or participating in the Good Friday procession which portrays a horrific exhibition of blood, torture and corpses.

“Lee-N is a highly professional actress, so these reactions did not affect her work. We were all a little bit concerned with some of the Facebook posts threatening physical violence towards the actress, so I always had someone on standby to watch out for any aggressive interaction. But at the end it was all bark and no bite.

“The street theatre acts portray a simplified version of scenes from the production Min Hi at Rialto Cinema. Min Hi presents 6 scenes with monologues from 12 different female characters lifted from a variety of sources, namely the bible, literature and Greek mythology.

“During the street theatre acts the actress was mute while, in the production, Lee-N will enact a complex one-hour long script accompanied by a demanding physical action routine. Furthermore, soprano Nadia Vella will complement the scenes with a vocal score that I composed specifically for this production.”

Tickets for Min Hi are available by clicking here.