You are here: Home / MUSIC / Tango is for devils… 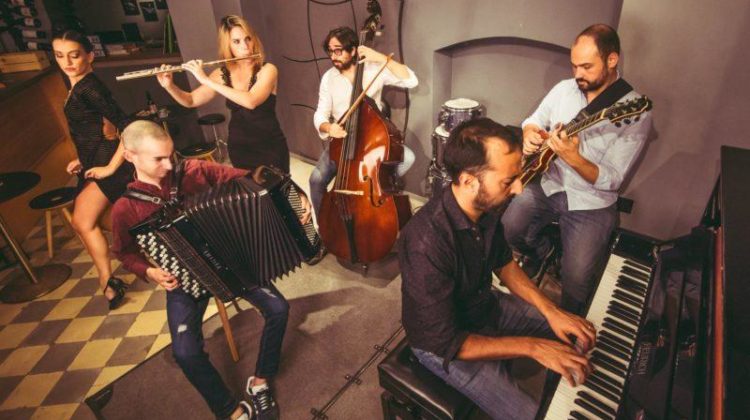 and for angels, too

And Tango Nuevo Quintet are planning to show us exactly what they mean while performing Astor Piazzolla’s tango nuevo in a concert that gives homage to the popular musical masterpieces of the Argentinian composer.

The concert, Diablo y Angel in honour of one of Piazzolla’s works, is being organised by Culture Venture and will be held at Robert Samut Hall, Floriana on October 24 and 25 at 8pm.

We caught up with Camilleri, and here she shares some of her thoughts about this upcoming event. All the photos are by the wonderful Elisa von Brockdorff.

This year I took the leap and approached my fellow musician friends, who agreed to collaborate with me in this project.

Through the years I have played with them, as duo or trio, but we never performed all together as a quintet. Since all of them are fantastic musicians I thought that it would be great to unite for the Tango Nuevo quintet and debut with the work of Piazzolla.

My choice of musicians was based on their high level of musicianship and on their musical expertise which would be suitable for this musical genre. Tango Nuevo Quintet is composed of two jazz players, two classical musicians and a Tango specialist.

The choice of the musicians reflects Piazzolla’s music which is a mixture of both classical and jazz music. Tango Nuevo represents a synthesis of the Piazzolla’s musical and cultural backgrounds, conjoining the tango legacy of Buenos Aires, the jazz idioms that he absorbed in New York, and the international traditions of classical music.

“Tango is about rhythm, passion, emotions, and expression”

In 2012, I started to play Piazzolla music for flute and guitar duo when I was studying in Italy, which instilled in me the love for tango music. It was a very good way to improve the ensemble playing since tango music is about understanding each other’s musical phrasing and emotions inside the music.

In 2017 accordionist, Giancarlo Palena, approached me to join his Tango quartet to perform in Atessa, Italy.

Musically, Tango is about freedom within a musical framework – it’s all about rhythm, passion, emotions, and expression. Tango also has strong historical connections to the migrant communities of Argentina and often serves as a platform for cultural anthropology and cultural relations.

Tango is about cultural diversity and demonstrates the ability of music to be considered as a multi-disciplinary field because of its ability to fuse itself inside politics in a very soft way.

“Italians prefer to use the bandoneon for tango, as the accordion sounds too happy“

For Astor Piazzolla, tango was always “for the ear rather than the feet.” – Instrumental music will be the main focus of this tango concert, however two dancers, from Moveo Dance company will be joining us during the Muerte del Angel and the Romanza del Diablo.

Giancarlo will also play the Bandoneon, an instrument which is rarely played in Malta. The bandoneon is synonymous with tango music after many sailors also picked up the instrument and eventually brought it to Argentina.

Italian accordion players soon adopted it to play tango for its sad, velvety sound, because its cousin the accordion “sounded too happy”.

Piazzolla introduced elements from classical music and jazz, including counterpoint and the electric guitar, calling the new style as Tango Nuevo. In addition, Piazzolla downsized the traditional orquesta típica (large tango orchestra) to smaller chamber ensembles, expanded the harmonic palette of tango, and most significantly, moved the genre from the ballroom to the concert hall.

“The most challenging parts are capturing the different colours of sound”

Piazzolla is about rhythm, energy and passion, hence communicating life through the tango language. The most challenging parts are capturing the different colours of sound one needs to convey and the liability to the rhythmical framework.

Working as an ensemble we have to understand each other musically within the different tempo changes, rubato phrasing and expressions which this musical genre demands.

A personal challenge is the translation of the extended techniques of the violin sound to that of the flute sound. Piazzolla applied the percussive gestures that had been common in traditional tango in his compositions. Effects like: lija (sandpaper); golpe (knock); latigo (whip); perro (dog); and tambor (snare drum) were often performed by the violin and occur frequently in his style.

The audience will in fact be seated in the round to be able to immerse itself in the passion of the music. The two dancers will also be performing around us. As a former church built in a neo-gothic style, the space brings in the element of the sacred meeting the secular.

The core of tango culture: a mode of spirituality that was neither religious nor secular but drew from both and transcended both. It is the ability to evoke the presence of angels that makes Piazzolla’s music like no other.

Enjoy reading about cultural events? Check this out.