You are here: Home / THEATRE / A purely Victorian send-up, or totally relatable satire? 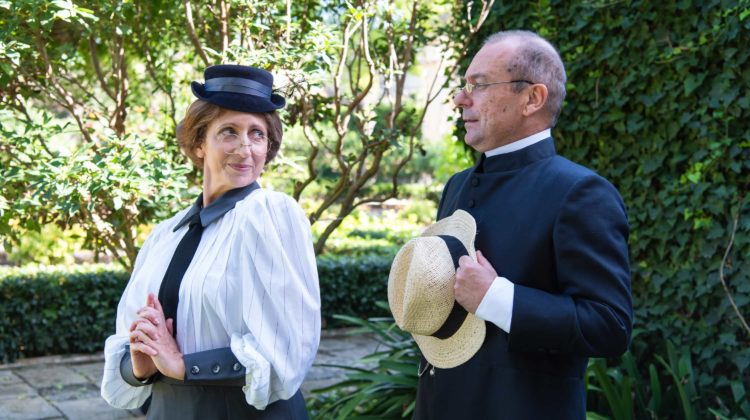 Oscar Wilde, the ultimate wag, lands at Teatru Manoel with The Importance of Being Earnest, one of the playwrights most widely-lauded scripts.

With the tagline ‘A Trivial Comedy for Serious People‘, you don’t need to be a committed Wildian to know that you’re in for a good ride. Expect cutting satire that may have been written with the Victorian society in mind, but that is likely to surprise you and leave you thinking: “well, that’s relatable”.

With theatre veterans Isabel Warrington and Michael Mangion taking on the roles – of Miss Prism and Dr Chasuble respectively, we should be in for a good ride. Fun fact: although this is Mangion’s first Wilde production, he took on the role of the playwright himself in a Maltese play some years ago.

I caught up with Warrington and Mangion to pick their brains, and this is what they had to say.

About playwright Alan Bennett describing it as the ‘perfect play’:

Mangion: I do agree. It is actually my favourite play so I’m very happy to be finally performing in it. It is brilliantly written with a great mix of characters and the wittiest of plots and language.

Warrington: I am not sure what Alan Bennett meant by that, so I can only give my own opinion. But, in my eyes, the play really pokes fun at Victorian ideals. It is a caricature of the classist society of its time.

About the pressure of performing such a classic:

Mangion: The play is so well written that the pressure is actually in ensuring that everyone maintains the rhythm of the script so all the humour is delivered. Timing is particularly important when delivering Wilde’s lines. Fortunately, the cast is all on the same page and the director is making sure we stay there so that eases the pressure.

About the pressures of each role:

Mangion on Dr Chasuble: The play is farcical, so the particular challenge is to find that fine line between playing a comic role and still making him believable. There is a danger of overacting in roles like this one.

Despite being a minor character, Wilde still manages to create him as a complete character with his own journey however short that is. I play a Church of England vicar in a small English country parish with apparently very little experience of the real world so, I don’t see anything of me in the character. But that is exactly the fun of playing him.

Warrington on playing Miss Prism: Miss Prism is an austere, somewhat naive and prudish governess. I am interpreting her the same way I interpret every other character… by understanding what is being said in the script and creating a character from that.

I’m really enjoying this character because her austere facade belies a passionate soul who is besotted by the Canon, Dr Chausble. Although it’s a relatively minor role, there is lots of fun to be had with the script. The absurdity of the language and the social etiquette make it a real gem of a part.

As for seeing myself in this character, I think I can safely say I’m her polar opposite!

About how relatable the play remains to date:

Mangion: It is still very relevant. All the political statements Wilde makes about the society of his day are easily translated to elements of today’s society, ranging from politics, social politics, religion and class inequalities.

We might not be wearing the restrictive Victorian fashion, however, as long as there prejudices in society whether they are related to gender, wealth and class there will always be parallels to modern living.

Warrington: I see this play more as a satire of the society of Wilde’s day which is a far cry from today’s society. I don’t draw many parallels between the two. I approach it as a theatrical farce that pokes fun at the social mores of the time. Other than the fact that absurd social repression usually leads to some kind of rebellion, especially in the young, there isn’t much in common with modern times.

The Importance of Being Earnest takes place between January 31 and February 8 at Teatru Manoel. Tickets are available from here.

Want to know more about theatre events in Malta? Read this piece about what’s in store for Teatru Malta 2020, and this other piece about how a panto in the dark raised audience expectations.