You are here: Home / THEATRE / ‘If you run an education system that suppresses creativity, don’t be surprised when that’s what it does’ 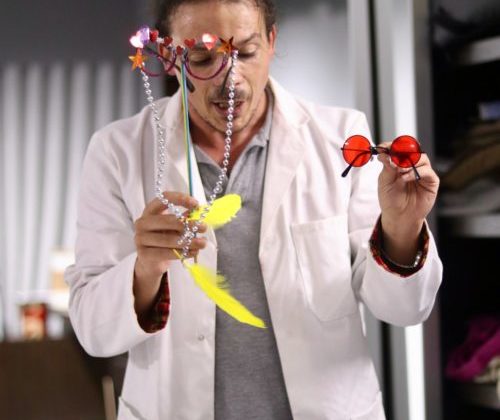 With more focus being placed on learning things by rote and studying for exams rather than for actual learning the subject, playwright Denise Mulholland feels that it is no surprise that the system is killing off all creativity and individuality.

She takes all the issues to task in her latest script, JamBoy, which is being performed as part of the ŻiguŻajg International Children’s Festival that is organised by Spazju Kreattiv. The play is produced in collaboration with The Shrinking Violets.

Where did you get your inspiration for the script? How was the idea for JamBoy born?

Each of the Violets has a lot of experience in education. We have all worked with children and young people and most of us still do. Creating quality, thoughtful work has always been our remit and when we had the opportunity to create a piece for a younger audience we were delighted.

As a group, we brainstormed a lot of ideas. We knew we wanted this piece to be a bit different. We wanted it to be about empowerment and empathy, and we wanted to tackle a subject about which we all feel very strongly.

Children, young people and teachers are under so much pressure today- and we experience this first-hand. As we talked, the idea for this special character was born.

A quiet, thoughtful, artistic boy, one of those kids who can easily get lost in the mix. A boy who doesn’t have the loudest voice but who has the ability to see people for who they really are. Someone who is not bound by labels but instead is able to see beneath the surface and find the superhero in everyone.

Would you say it is inspired by your own experiences of the Maltese education system?

Well, that certainly plays a part in it, but it’s not limited only to Malta. Before I left the UK I noticed some alarming changes in the education system and I have many friends living there who are educators, who confirm that things are no better.

Here’s the thing: as the inspirational Ken Robinson pointed out if you design a system to do something specific, don’t be surprised if it does it. If you run an education system based on standardisation and conformity, a system which devalues and (in certain cases) suppresses individuality, imagination and creativity, then don’t be surprised if that’s what it does.

This is a bit of a soapbox for me. I was ‘lucky’ in that I was good academically at school. Although my heart was not in physics or maths or geography, I did well in my exams.

This was partly because I had a good memory, and partly because in those days (a very long time ago…) we were encouraged to learn about the subject. We were taught the syllabus, as opposed to being taught how to pass an exam.

Over the years I saw this trend develop where, for example, students would be taught to write the same essay over and over, perfecting it, ticking the boxes for descriptive writing, alliteration, metaphor etc etc.

They were being trained to regurgitate this essay whatever the topic given in the actual exam, they were being taught to amend and edit their essay in order to have it fit the required brief.

They were not being taught how to react in the moment, or how to draw on their imagination or how to take inspiration from books and paintings and films, and a myriad of other things. I found this suppression of creativity deeply concerning.

What is this idea of success that we are obsessed with? I mean, what even is success? What is excellence? Surely, by their nature these things are relative and subjective, but there seems to be a huge amount of pressure on people to achieve them.

Or, for the kid who knows he wants to be a dancer but is taken out of his dance classes so he can attend extra lessons in physics, because dance isn’t a proper career.

It leaves no room for the kids who struggle with focus and concentration but want to learn and do their best, or for the kids who find the pressures of constant exams and assessments overwhelming.

It also restricts room for those teachers who see these kids and want to help them and spend more time with them and facilitate their learning. Because they have quotas and marking and paperwork and more marking and deadlines and targets.

Somewhere along the way we have lost sight of what education is for. And it’s not to produce little clones who can pass exams but can’t think for themselves. Surely it was never about that?

I have had six-year-olds come up to me and tell me they have to miss their drama lesson because they have to stay at home to study for their exams. SIX YEAR OLDS! First of all, call it a test, not an exam.

And, secondly, what the hell are we doing to these kids? When do they get to play and have fun and be children?

As you can see, I get very heated about this because I think it is becoming harder and harder for children and young people to just be. So, there is a lot of this reflected in the script, only not in such a fire and brimstone way. Hopefully, it’s tackled a little more light heartedly.

What is the equivalent of the Wall of Shame in the world of kids today?

I think social media is a skewed mirror for a lot of young people. We’re back to the idea of success and excellence and what we see on the outside. We all know that nobody’s life is perfect, but you could be forgiven for doubting that when you see all the happy, shiny people on Instagram and Facbebook.

As adults, one would hope we can apply some cynicism and remind ourselves that, just before the guy in the photo posted a grinning shot of himself telling everyone how fabulous he was feeling, he was sitting in a corner weeping about the fact his boyfriend had just broken up with him.

We should be able to do that, but younger people and children might not be so successful. Constant exams and assessments don’t help them evaluate what they know, they make them feel stressed about what they *don’t* know.

Kids feel ashamed of themselves way too much nowadays. I tried to think back to the dark ages when I was a child and genuinely the only time I remember feeling ashamed was when I had been unkind or had gotten into trouble (usually for talking). Or maybe when I lied about something, and then felt so guilty I had to confess.

I never felt ashamed for getting 12/20 in a spelling test or (somewhat ironically) for failing my music A level the first time I sat it. I was disappointed, but I didn’t feel ashamed. I wasn’t made to feel ashamed. I think it’s different now, and I think that is a very worrying state of affairs.

What was the biggest challenge when writing this script?

Getting it down to the duration we had agreed. Once we started on this, we discovered so many things, we created characters we loved, and we wanted to see more of them. We only just scratch the surface of the lives of these people, but I think we do manage to show you that there is always more to a person than meets the eye.

Of course we have Joseph Zammit, who could have been born to play this role. He has to play upwards of 20 characters and keep track of around 30 pairs of glasses, various jablo heads and keep an audience of nine-year-olds engaged.

We were so lucky to have him, so a lot of things in the script which a lesser mortal might have balked at, are welcomed as a challenge by Joe. And, of course, having fellow Violet, Chiara Hyzler as the director, is just brilliant. She really understands the challenges in creating theatre for young audiences. It needs to be visually-engaging and fast-paced but also needs to allow time for them to process and reflect.

What reactions do you expect to see from the audience?

Well I hope they laugh, first and foremost. Because it is intended to be funny. I hope they find a character they can relate to- whether it’s Jamboy (quiet, thoughtful, insightful, kind) or Taz (an unlikely hero from a difficult background, angry, frustrated, generous to a fault) or Pippa (perky, popular, heartbroken, brave) and perhaps they will see something of themselves in those characters.

I hope they watch and think, ah yes this is true… every one of us can be a superhero, maybe not academically, but I can be kind. I can be empathetic. I can be respectful of others. Those are super powers which we all felt have been discarded in the last few years, it would be wonderful if an audience member recognised the value in them.

Is this just for children or will it resonate with the parents, too?

Well it resonates with all of us Violets and we’re not (technically) children. I really think this is a piece that speaks to everyone. If you’re a child you will understand it on one level, if you’re a parent I think you will see it quite differently.

This piece is all about perception – how we perceive certain people or situations and I believe that is relevant to everyone, irrespective of age.

As Jamboy says: ‘”It’s not what you look at that matter, it’s what you see.”

Jamboy is part of Ziguzajg International Festival for Children, which is organised by Spazju Kreattiv. It takes place between November 15 and 23. Tickets are available online by clicking here.