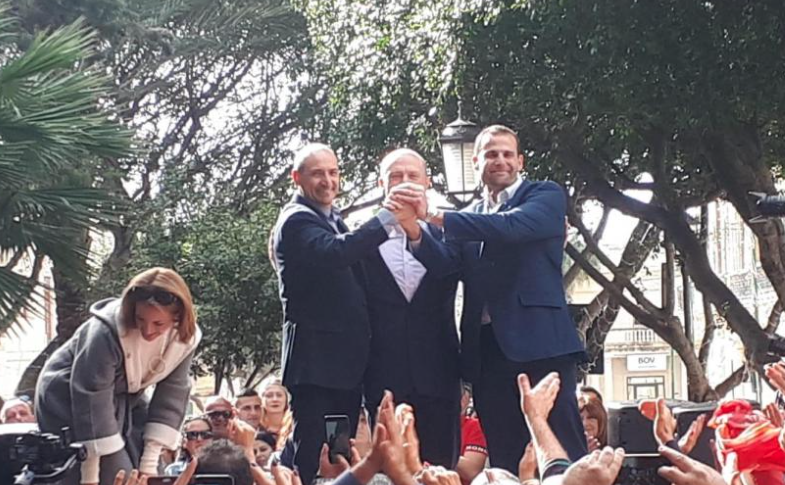 And we need a real people’s party

This photo (taken by Matthew Xuereb for the Times of Malta) is instantly iconic for all the wrong reasons.

The two big shining hopes of the PL, one of whom is supposed to deliver the country from evil etc, posing with Joseph Muscat during the latter’s national tour.

Let’s not even go into the whole national tour saga. I mean, we all knew that the Muscats were more about the glitz and glam rather than the responsibilities of the office, but this is taking it to boyband levels.

But back to the topic of PL’s shining bright hopes posing with the man at the very centre of the maelstrom. No wonder Graffiti took to Castille again this morning.

I mean, this is the guy who inherited the Health Ministry in the aftermath of the Vitals scandal and, despite all the growing evidence that something stank to high heaven, refused to distance himself from the cosy inner sanctum this government created.

Well, apart from a ‘too little, too late’ vague statement given a couple of days ago, when it became obvious that the ship was sinking.

So yeah, we know where we stand with him.

Robert Abela, on the other hand, I am not quite sure what’s up with that.

Barely two days ago he was pontificating self-righteously how he wanted no part of the current ‘diabolical’ PL setup.

And today he is taking selfies with the same prime minister who ended up out on his ass precisely due to said diabolical setup.

Dude. You might want to rethink your strategy, there. It’s painfully obvious that you take us all for fools, but there is a limit, you know.

We don’t ask for much. Just one decision that convinces us Malta stands a chance in the evolution pool.

Where are the young stars, the young hopefuls asking what they can do for their country?

If there was a time we need Graffiti to grow out of the pressure group stage and become a fully-fledged political contender, this is it.

Seems to me like Malta is ripe for a true people’s party. And heavens know we need some actual left leaning action on this island. We don’t want another morally bankrupt capitalist party masquerading as socialist.

And many of us certainly don’t want another conservative PN clone that stands for all the values we don’t believe in.

Go for it already, Graffiti. Malta needs it.